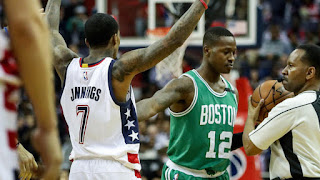 Celtics guard Terry Rozier said he isn't going to get into another altercation with veteran guard Brandon Jennings in Game 4. He's learned his lesson.

Rozier and Jennings were both ejected in the fourth quarter of Game 3 on Thursday after the two couldn't stop jawing at each other and were eventually handed a pair of technical fouls.

It was a tiff that Rozier says got the best of him at the tail-end of a lopsided game.


"I just think that the way the game was going, we were down by a lot the whole game, things weren't going (well), so I got caught up in that at the end of the game," Rozier explained. "If it was a close game, I wouldn't have went down that road with him. But he pulled a vet move and it worked. He got under my skin or whatever you want to call it. But I'm not going to feed into that. I'm worried about Game 4."

It was a veteran move by Jennings. Rozier says it's Jennings' job to get under his skin and added that aside from that, Jennings isn't a factor.

Celtics All-star point guard Isaiah Thomas chimed in on the Rozier-Jennings spat, stating that while Jennings was the instigator between the two, Rozier isn't the one to pick on.


"A lot of people don't wanna mess with Terry. He's really with that," Thomas said. "That's what Jennings is doing, I guess he got the best of him last game but Jennings' been doing that all year. I mean, Jennings' a good friend of mine as well but he's been that guy to just [get] real physical when he comes in the game and tries to change the outcome of the game and that's his job. I guess he did a really good job at it last game."

Click the video below to watch Rozier's full-length interview from Saturday's practice at Georgetown University.