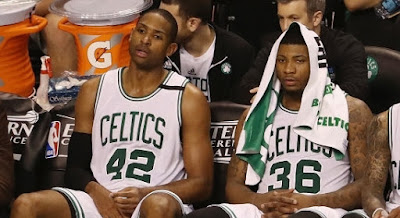 The Celtics were clearly more banged up than they led on for the last couple of months of their season.

According to a report via the Boston Globe, Danny Ainge said the Al Horford and Marcus Smart were playing injured throughout the playoffs.

The Celtics president of basketball operations says that Al Horford was playing with an elbow injury he sustained back in March while Marcus Smart was playing through back spasms.

The report states that according to Josh Ketroser (Smart's agent), his client was diagnosed with paraspinal muscle spasms with a facet joint impingement. The spasms were so bad, that had it been the regular season, it would have kept the three-year veteran point guard out of the Celtics lineup.

Al Horford sprained his right elbow during the Celtics March 3 win over the Lakers, he would then miss the next two games. The veteran big-man played in every game, including the playoffs after that.

On Friday Horford was asked on what he planned to work on this summer, to which he responded to make sure he remained healthy


"Everybody has bumps and bruises, right as the season goes on?" he said. "That's all I'll say. I'm fine, good, just get healthy." [Boston Globe]

We we're well aware of Isaiah Thomas and his hip injury that cut his Eastern Conferance Finals short against the Cavaliers as he missed the last three games of the series. It is still unknown if the All-Star will require hip-surgery or not, it's still a waiting game for the next few weeks.

"His hip was bothering him some here and there [during the season]," Danny Ainge said of Thomas' injury. "But there were some days his hip felt great and some days it was a little more sore than others. It was Game 6 against Washington where I didn't know what he was going to give us in Game 7, because he aggravated it. And you go out and get 29 points and help us win Game 7, it was pretty special performance in my mind." [Boston Globe]

Other than his hip, Thomas also got his tooth knocked out in Game 1 against the Wizards, while having to adjust two other teeth in the process. Several hours of oral surgery were required to repair all teeth affected from the hit by Otto Porter

Avery Bradley suffered two hip-pointer injuries on his left and right side against Washington and rookie Jaylen Brown was also nursing an injured hip after Game 4 against Cleveland as well.

“Guys just gutted it out,” Ainge told the Globe. "It was just guys playing with a lot of stuff. But Avery had some incredible performances, especially when you've got a hip pointer on both hips. I mean, that's pretty tough. We saw how Jaylen struggled with that in the last game. That's no fun." [Boston Globe]

Assuming all those injured return in time for training camp, it will definitely be a summer of rehab and rest for the Celtics during the offseason