Kelly Oubre suspended for Game 4 after spat with Kelly Olynyk 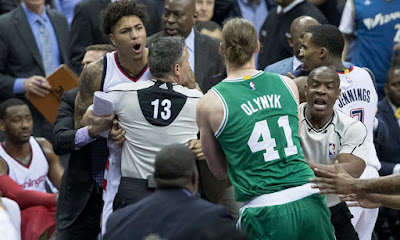 Washington Wizards forward Kelly Oubre has been suspended for Sunday's Game 4 against the Celtics. The NBA announced on Saturday, two days after his Game 3 ejection for shoving Kelly Olynyk in their blowout win at the Verizon Center.

After being knocked down due to a hard screen set by Olynyk early in the second quarter, Oubre charged the Celtics big man and pushed him to the ground by burying his forearm into Olynyk's chest while referee Monty McCutchen tried to get in between the two players.

Oubre was assessed a flagrant 2 and immediately ejected after the refs reviewed the replay several times.


"I've been hit in the head multiple times by the same person," Oubre told reporters. "I've confronted [Olynyk] about it. The last time it happened, I fell, I felt pain in my head and my jaw, and I got up and I ran to him and I bumped him."

The Wizards won Game 3 as they routed the Celtics 116-89, but still trail in the series 2-1. Game 4 of this Eastern Conferance Semi-Finals matchup is on Sunday. Tip-off is at 6:30 on TNT

The Celtics and Wizards racked up a combined 16 technical fouls during their four regular season meetings. In Game 3 alone both teams committed eight techs (four each) and featured three ejections (Oubre, Brandon Jennings and Terry Rozier).