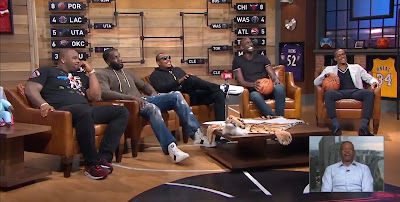 It's no secret some members of the 2008 championship Celtics are still not happy with Ray Allen and his decision to take his talents to South Beach in the summer of 2012.

Monday night on TNT's Area-21, the message couldn't have been more clear when Paul Pierce, Rajon Rondo, Kendrick Perkins and Glen Davis joined Kevin Garnett to talk about a plethora of topics including why their former teammate Ray Allen was not invited on set or to 10-year a reunion happening later this year?

"Everybody's asking us, 'Where's Ray?' People don't understand that this is real life for us," said Garnett. "The situation with Ray is very sensitive. I think that when we all talked about doing this reunion tour, we were talking about guys who we consider loyal and part of this group. Just being honest, my two cents, when Ray decided to go to the Heat, I felt like he moved on. And he went to pursue another ring, he got another ring, shouts to him. And that's it. There was no other Wizards, it wasn't no other Spurs, it wasn't no other Heat. It was all Celtics invited to this."

Added Pierce: "I was initially hurt by the whole way everything went down. ... I thought we formed a brotherhood here in Boston. Just how we carried ourselves, not only on the court, but off the court. And I just figured if it was me leaving or KG leaving, then I would have been like, 'Rondo, Perk, Baby, this is what I've been thinking about.' That's what I was hurt by when Ray didn't just at least give us a heads-up about it."

A month after the Heat rallied in the 2012 Eastern Conferance Finals to beat the Celtics in seven games after Boston held a 3-2 lead, Allen turned down a better offer from Danny Ainge (more money and a 'no-trade clause') to play in Miami.


"I just feel like, it ain't what Ray did, it's how he did it," said Perkins. "We did form a family. We all shed tears together, talked about some of the deepest things -- I'm talking about outside of basketball that the world don't know about. If you felt like you wanted to go that way and [sign with a rival], I just think he could have handled it a different way."

Allen went on to win another title with the Heat in 2013, playing a key role in beating the San Antonio Spurs in seven games.

Garnett is adamant that time heals all wounds and he has no ill will towards Allen. KG also believes that Allen will eventually make amends with his former Celtic teammates.

Almost five-years later, you can see it still bothers 'The Big Ticket' and 'The Truth' to some degree that Allen didn't communicate with anyone that he would choose to join their rivals rather than battle them one more time.


"I think I would have even took it better if he had just talked to us about it," said Pierce. "I don't know how his relationship was with [coach] Doc [Rivers], it was kinda souring at the time because Avery [Bradley] was getting more minutes, so I can understand all that. But I just felt like we should have had a conversation. I think it would have settled over a little bit more. I don't think it would have been as salty.

"Even though it was Miami -- we hated them, we hated Miami and that was our rival, we were going at it with them, LeBron [James] and all them. I just think if we had all just kinda talked about it, it would have been a little different than it is now. Now it's uncomfortable. I haven't talked to Ray in some years now. It's just different."

Rajon Rondo, who had his issues with Allen towards the end of the tenure together in Boston, remained quiet during the segment, despite the panel encouraging him to speak.

In the end, it was Rondo's best friend that said Allen had to make to first move to try and reconcile any relationship they once had.

For the time being, it looks like Ray Allen may have no intentions on making up with his 'Celtic Brothers' as he took to Facebook to share the picture below on Tuesday morning: 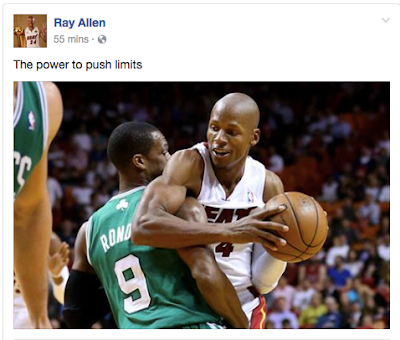 When asked about his former teammates and if he could ever help put their difference aside and play peacemaker, Avery Bradley responded

"I don't know, but let me say this, they're all a good group of basketball players but an even better group of guys, I hope I could one day," said Bradley after practice on Tuesday. "It's always good seeing those guys together."

All in all the night was a success as it was nice to see the mini reunion regardless on who's side you're on when it comes to Allen's departure to Miami.

Here are some highlights of the Celtics' edition of Area-21: