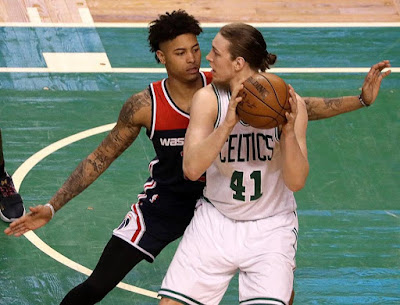 With the city of Boston and their sports fans dealing with being called 'racist,' a label that they can't seem to shake these days. In light of Baltimore Orioles' outfielder Adam Jones being called the N-word at Fenway Park last week, it didn't come as a surprise to see some backlash from national media outlets about how fans behaved at another home stadium.

Celtics fans at the TD Garden welcomed Wizards forward Kelly Oubre with a few chants during Game 5 on Wednesday night, though none were racial, more than most would still consider them inappropriate.

Initially, the Garden crowd chanted "We want Oubre" before he officially checked into the game. Scott Brooks subbed Oubre in midway through the first quarter to a rain of boos which continued each time he touched the ball throughout the night.

Eventually the loud simple boos turned into harsh "F*** you Oubre!" chants in the fourth quarter that even TNT's microphones captured loudly during their broadcast once the Celtics secured the win while having a comfortable double-digit lead over the Wizards.


"We told him what to expect from the crowd," said Wall after the game. "We didn’t think it would be those type of words. They’re going to do what they want to do. I think Kelly did a great job of handling it. He didn’t let it bother him. He just kept playing basketball. All he can do is go out there and play basketball. We’re his brothers and we stick behind him." [CSNNE]

Oubre finished with 13 points (six in the final frame, when the vulgar chants began), as he returned from a Game 4 suspension after lashing out on Celtics big man Kelly Olynyk in the Wizards' Game 3 win. He knew he'd expect some lashing from the home crowd before checking into the game.


“I can’t really listen to the fans. I just have to focus on our tight huddle,” said Oubre before Game 6. “I’m pretty much used to all the booing and all the crazy stuff that fans can say. My job is to go out there and play basketball and not worry about the fans.” [Boston Globe]

Olynyk has caused a national debate whether he's seen as a 'dirty player' or not, with several around the NBA who seem to think so. Clearly that had no baring in Boston, as the Garden faithful made it loud and clear what they thought about the situation and standing behind their center with an ovation while profane chants didn't seem to bother Oubre.


"Man, look. They’re trying to make it more than it needs to be. We’re playing basketball here," guard Bradley Beal said. "They’re going to protect Olynyk here and we’re going to protect Oubre on our team. When [Olynyk] comes to D.C. on Friday, it’s going to be the same thing. We booed him [in Game 4]. It’s just part of the game. We don’t pay attention to that." [CSNNE]

With the national media having their own agenda when it comes to Boston sports fans these days, what happened in Game 5 might not have helped the city's case. Though the chants were not racial, it wasn't the best time as the city continues to be under a microscope.

As the series shifts to Washington D.C. for Game 6, it will be interesting to see how the crowd reacts when Oubre and Olynyk will both be playing for the first time at the Verizon Center since Game 3 come Friday night.