Celtics win the NBA Draft Lottery, land the No. 1 pick 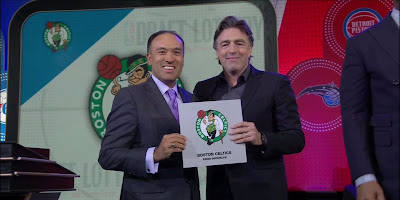 It wasn't luck (maybe a little) or a dream, the Celtics landed the No. 1 pick during the NBA Draft Lottery on Tuesday night in New York.

Boston earned the best odds (25-percent) to grab the No. 1 pick by via the Brooklyn Nets (finished with the worst record in the league at 20-62) in a trade that Danny Ainge orchestrated in 2013, sending the franchise player; Paul Pierce and Kevin Garnett in return for three-first round picks, including the right to swap picks in this year's draft and in 2018.

In less than 24 hours after the Celtics advanced to the Eastern Conferance Finals in a Game 7 victory over the Washington Wizards, C's fans now have one more thing to celebrate for the time being.


"It felt just like winning Game 7 last night," said Celtics co-owner Wyc Grousbeck, who represented Boston at the lottery. "There's a lot of good feelings around the Celtics right now. It's great to be a Celtics fan right now." [ESPN]

Boston, who haven't landed a No. 1 pick since 1966, become the first one-seed to grab the top pick in the draft since the Los Angeles Lakers in 1982, when they chose James Worthy.

Paul Pierce, who says he plans on retiring after this season, let be known he had something to do with the Celtics winning the Draft Lottery on Tuesday with a special tweet:


Three of the NBA's most storied franchises were big winners on Tuesday night, as the Celtics, Lakers and the Sixers landed the first top-three picks. Magic Johnson, who represented Los Angeles, walked away with the second pick for the third straight year after the Lakers drafted D'Angelo (2015) and Brandon Ingram (2016).

Joel Emiid represented Philadelphia and he was all smiles as the Sixers landed the third pick.

The patient rebuild of the Celtics president of basketball operations Danny Ainge is being rewarded in a big way four years later. Ainge on "beating" Magic Johnson and the Lakers in the lottery on Tuesday, says he doesn't see it that way:


"We didn't beat Magic. It's total luck. They're picking pingpong balls. There's no beating anybody. I think the Lakers obviously were very very fortunate in the draw and they're off to a great start." [ESPN]

Many consider next month's draft to be loaded with talented, especially at the top, where point guards Markelle Fultz (Washington) and Lonzo Ball (UCLA) could be taken first and second overall.

Here's what the rest of the Draft Lottery results look like below: 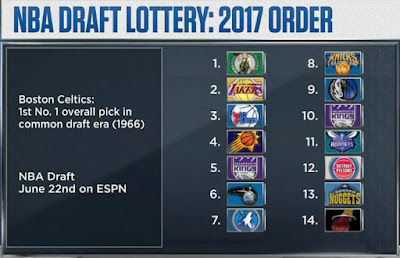 Barring any trades, this will be the the first time the Celtics and Lakers have owned the first two-spots in the same draft.

Twenty-years ago, the Boston had the best odds of grabbing the first pick, only to watch the San Antonio Spurs win big in the Tim Duncan sweepstakes, this time around the Celtics are riding the ultimate wave, without having to 'tank' in the process.


"It is just crazy. The energy in the building last night was incredible. I have been here 15 years, two Finals, and it was as good as any atmosphere we have ever heard in there," Grousbeck said. "Sending Washington home meant a lot. They're a good team. ... Then you got to muster up and squeeze in the lottery and somehow win that, and now we got LeBron [James] coming in [on Wednesday]. It's a crazy time." [ESPN]