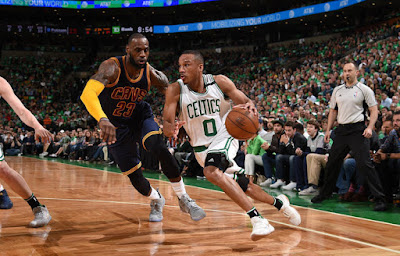 The Cleveland Cavaliers are heading back to the NBA Finals for the third straight season, while LeBron James is making his seventh consecutive trip to the big dance after eliminating the Celtics from the postseason in a 135-102 Game 5 victory at the TD Garden on Thursday night.

James finished with a game-high 35 points, passing Michael Jordan to become the NBA's all-time playoff scoring leader, to go along with 8 rebounds and 8 assists to help the Cavs claim their third Eastern Conference title and a date with the rival Golden State Warriors for the rubber match everyone was waiting for.

Kyrie Irving added 24 points, 7 assists while Kevin Love notched another double-double of 15 points and 11 rebounds. Deron Williams chipped in 14 points off the bench for Cleveland, who advances with a 4-1 series win and a 12-1 overall record during the playoffs so far.

Avery Bradley led Boston with 23 points and 4 rebounds. Gerald Green added 14 points (3-of-6 from behind the arc) while Jae Crowder scored 11 points and grabbed 6 rebounds. Terry Rozier chipped in 10 points and 7 assists off the bench for the Celtics, who were playing without Isaiah Thomas (hip) for a third straight game.

Boston never led in this one, as they trailed by as much as 39 points. Cleveland set the tone early in Game 5 by building a quick 21-point lead and never looking back. The Celtics only hope was to take advantage of their momentum after winning Game 3 (their only victory in the series) and jumping out to a 16-points lead in Game 4, and dominating for two and a half quarters before Kyrie Irving brought the C's back down to earth and LeBron James also crushed any chance of extending the series beyond five games.

Despite the fight in Games 3 and 4, the Cavaliers' 2-0 deficit was too much to come back from for the Celtics, plus the loss of their leader, Isaiah Thomas. But Brad Stevens was encouraged to learn that no one in his locker room was satisfied with just making it to the conferance finals


"I told our guys: 'We made a lot of great strides, but this pain is part of the path to what we ultimately want to be," he said.

After a 53-29 season as the number one seed in the East, the Celtics exceeded all expectations, especially after not being able to win a playoff series over the last four season and only having two postseason wins in the Brad Stevens era (2-8) before this current run.

This Celtics group should hold it's head high and look foward to a bright future that begins with the NBA Draft in less than a month away.

LeBron James scored 30 or more in 11 of Cleveland's 13 games this postseason and are now 36-5 against the Eastern Conferance opponents in the playoffs since 2015. The Cavaliers set a franchise playoff record for scoring the most points in a quarter with 43 in the first frame and set another record for the most in a half with 75 points. Boston concluded their postseason run at a record of 9-9 and despite having home-court advantage throughout the East playoffs, they finished with a 5-5 mark at the TD Garden.