Isaiah Thomas says hip surgery is not a top option 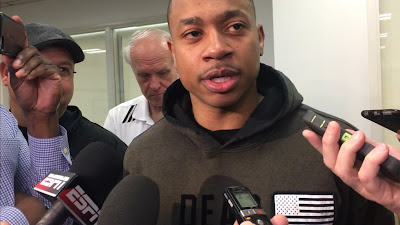 Isaiah Thomas says he's waiting for the swelling in his right hip to subside before making any decisions on how to rehab the injury, but also mentioned that surgery at this point in time is not a top option.

"[Surgery is] not the No. 1 option right now, but it could be once the swelling goes down," Thomas said Friday while addressing reporters at Boston's exit interviews. "They want to let [the swelling] die down a little bit then take another MRI once everything is down and it's back to normal. We'll go from there. Hopefully I don't have to have surgery, but I know that is an option." [ESPN]

Thomas did not offer a timetable on how long he'll be sidelined, only being told to be patient and wait until the swelling goes down before more testing can be done, but did mentioned that he and the Celtics are on the same page when it comes to the best path to long-term health


"I've gotta do what's best for me in the long run, what's best for my body. As [coach] Brad [Stevens] continues to say each and every day, it's how you're healthiest for the long run. Even [Celtics president of basketball operations] Danny [Ainge] and those guys say that, so that says a lot about who they are as people.

"Most importantly, they care about my health, not just being a basketball player. So the Celtics are definitely behind me in this tough situation, but I mean, nobody's going to feel sorry for me. I just have to keep going and figure out what I've gotta do to come back at the highest level possible." [ESPN]

Thomas says he has informed his medical team and specialist earlier this week that the goal is to return next season at a "MVP level." The Celtics point guard has earned All-NBA second-team honors.


"The plan is to play until 40, and they know that. All them doctors know that," Thomas said. "So whatever they have to do to continue to play at, not just a normal level, at an MVP level, that's what I've been on them doctors about and everybody on that training staff is."

Thomas added "No matter what happens, let's make sure I come back even better. And I will." [ESPN]

When asked about his summer plans, Thomas revealed that this offseason will be a little bit different than what he usually does to stay in shape and prepare for training camp, due to his latest injury


"I usually take a few weeks off, and I'm at least playing at a YMCA or something," Thomas said. "That's gonna be the toughest thing, because I love hoop. So like any gym I try to be at, no matter who's there playing, and that's probably gonna be the toughest part about me being patient and having to let my body heal and understand what's important for the future." [ESPN]

Thomas originally believes that he injured his hip back in mid-March and continued to play with the nagging injury all the way to the Eastern Conferance Finals against the Cleveland Cavaliers. But after re-aggravating his hip in Game 2, the Celtics medical staff had to shut him down, against Thomas' wishes.


"Eastern Conference finals, that's the biggest stage I've ever been on. To not be able to go back out there in that second half and continue that series was painful," said Thomas. "Like it hurt me. Danny was right there. I couldn't get past him. They had multiple people come in and talk to me about what's more important, but I definitely wasn't trying to hear that at that point in time." [ESPN]

Thomas is coming off the best season of his NBA career, but admits the playoffs were tough for him despite the Celtics reaching the conferance finals for the first time since 2012.

Other than battling physical ailments for the last month in a half including dental work and his right hip, Thomas was also dealing with the death of his younger sister, Chyna, who was killed an a single-car accident the night before the C's playoff opener.


"It made me look back to see how fast everything can be taken away from me," said Thomas. "It definitely humbles you. It's been the best season of my career, but it's also been, as you guys know, the toughest year of my life. So however you want to take that, that's how the season's been." [ESPN]


"He's been through a lot, toward the end of this season. I know it's been hard on him, but we just appreciate him as teammates," said Bradley. "Me, individually, I really appreciate everything he's brought to this team this year. He's really had a special year. I don't think this year could have gone to a better person and player, for everything that he's been through and overcome.

Bradley added: "It's just been impressive, and I'm sad that it ended the way it did. Looking back at the season, Isaiah was pretty impressive and I know that he'll take care of himself, get ready for next year." [ESPN]

You can watch Thomas' full press conferance from the Celtics practice facility below: