Avery Bradley suffers second hip-injury, could sit out of practice 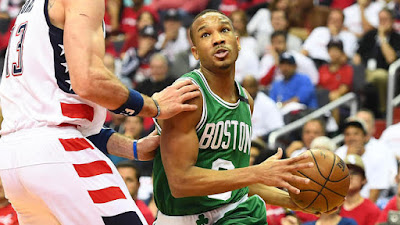 Avery Bradley just can't catch a break this season, he has injured his hip for the second time in less than a week.

The Celtics guard suffered a left-hip pointer in Sunday's Game 4 loss while running into a Marcin Gortat screen before the Wizards tied the best-of-seven semifinals series, 2-2. It remains unclear if Bradley will play limited minutes in Game 5 on Wednesday at the TD Garden.

Boston did not practice on Monday, but Bradley did join his teammates at their practice facility for a film session, then put up some shots afterwards


“He’s out on the court shooting now,” coach Brad Stevens said Monday afternoon. “Kind of loosening it up. Hopefully he’ll be able to practice tomorrow.” [CSSNE.com]

Bradley suffered a right-hip pointer in the Celtics Game 2 win last week and sat of practice the following day. Add this to the list of injuries and illness that forced the veteran to miss a team-high 27 games during the regular season.

In the Celtics' two wins in this series against the Wizards, Bradley averaged 16 points, 4.5 rebounds and 3.5 steals. But since his first hip injury, Bradley's averages have dipped to to 6 points and 3.5 rebounds in the last two games, both losses for Boston in D.C.

When healthy, Bradley was a solid contributor in 55 games averaging a career-high in points (16.3) and rebounds (6.1).

Despite the two hip-injuries, Bradley doesn't seem too worried about the next 48-hours as the Celtics resume their series at home.