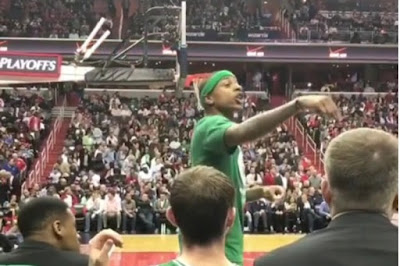 After an investigation, the NBA has fined Isaiah Thomas for his exchange with a Wizards fan in the second half of Game 3 in Washington.

Thomas, who after Game 4 criticized the officials for favoring the home team and not calling enough fouls for the Celtics, was fined $25,000 on Wednesday for the explicit exchange that was captured on video and went viral.

Just when it looked like Thomas had dodged a bullet for his comments after Game 4, footage from Thursday's Game 3 captured Thomas telling a fan "I will f -- you up, and you know that" after the fan reportedly told Thomas "take your toothless a -- back to Boston."

This video was captured by Instagram user Thesportytraveler and can be viewed below:


This marks the second time this postseason a Celtics player has been fined for interacting with a fan. Marcus Smart was fined for flipping off a fan at TD Garden at the tail-end of a Game 2 blowout against the Bulls.

Thomas was fined just hours before him and the Celtics get set to take on the Wizards in Game 5 at TD Garden.