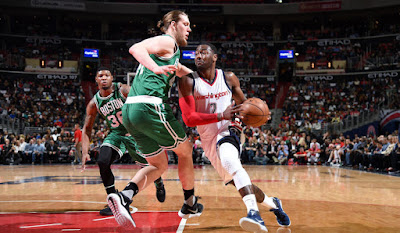 After falling behind 2-0, the Wizards demonstrated how tough they can be when they're able to slow down the Celtics' best player.

With the possibility of falling into a 3-0 hole, John Wall and the Wizards rose to the occasion and ran the Celtics out of their building en route to a 116-89 Game 3 blowout and are now one game away from tying the series.

After scoring a career-high 53 points in Game 2, Thomas put up his first dud of the postseason -- he finished with 13 points on 3-of-8 from the field. The Wizards did a superb job of double-teaming him, throwing different defenders at him and ratted him throughout the night.

Before the game, Morris questioned his team's toughness and the message appeared to be well-received as the Wizards were the aggressors early and often. With the game tied at 12, early on, Washington's offense rattled off a 22-0 run and finished the opening frame with a 39-17 lead.

The Wizards' toughness boiled over in the second quarter when Kelly Olynyk gave Kelly Oubre Jr. a hard screen before Oubre Jr. got back on his feet, and charged Olynyk to the ground. Oubre Jr. was ejected from the game and the Wizards continued to pour it on.

Washington extended their 63-40 halftime lead to a 30-point advantage (93-63) -- their biggest lead of the night -- with less than a minute left in the third quarter. By the fourth quarter, the chippy style of play reared its ugly head again when Terry Rozier and  Brandon Jennings couldn't stop getting into each other's faces and were both eventually ejected after receiving a pair of double-technical fouls.

Boston never lead once throughout the night, and couldn't cut their deficit to at least 13 points or less since the opening frame. The Wizards commanded the pace and for now have grabbed the momentum of the series before they host the C's in Game 4 on Sunday.

The Celtics will look to grab a 3-1 lead in Game 4 on Sunday to prevent the Wizards from tying things up a two games apiece before the series heads back to Boston for Game 5.

Isaiah Thomas, who didn't start the second half for the Celtics, had to have some dental work done in the locker room after his temporary teeth fell out in the first half. Thomas explained to the media after the game and says he doesn't plan on making any more trips to the dentist before the series shifts back to Boston for Game 5 next Wednesday.