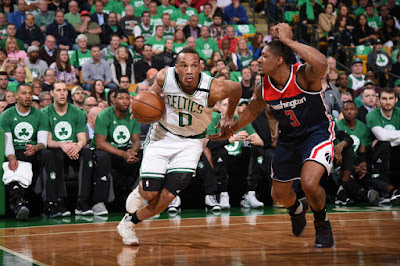 After taking two consecutive beatings in Washington, the Celtics finally hit back and did it with a vengeance.

From the jump, the Celtics were in control -- smacking the Wizards in the mouth with a 16-4 run and never looking back as they demolished Washington, 123-101 at TD Garden and grabbed a pivotal 3-2 lead in their best-of-seven series.

The C's tacked on 33 points in the first quarter while shooting an astonishing 65 percent from the floor. Led by Avery Bradley's 14 points and Isaiah Thomas' 5 assists, the Celtics were hot out the gate on offense while Al Horford and Amir Johnson did the dirty work on the defensive end.

Horford and Johnson did a phenomenal job of stopping the Wizards in the paint and the defensive stops led to easy buckets on the opposite end of the floor. The Celtics controlled the pace and held on to their momentum as they never came close to giving up a lead.

When Bradley wasn't hitting jump shots he was on a stationary bike staying loose throughout the first half and it paid off. Bradley netted 14 first-quarter points and had 25 by the end of the half.

Bradley, Horford and Crowder combined for 50 points -- all three Celtics players combined nearly scored more points than the entire Wizards team as the C's took a 67-51 lead into the break. Celtics continued to challenge the Wizards at the rim, especially John Wall and Bradley Beal.

They forced Washington to jack up shots from behind the arc -- where they finished the half, 4-of-15.

Horford was the focal point of the offense for the Celtics as he did his best Magic Johnson impression and picked the Wizards apart. Whether it was setting up Thomas or Bradley for a pick-and-pop jump shot or getting in the paint and finding one of his teammates cutting to the rim, Horford ran the offense and scored from in and out of the arc.

Through three quarters, he had 19 points, 7 assists and 6 rebounds as the Celtics took a 93-76 lead into the final frame. Meanwhile, the Wizards struggled.

Wall scored a team-high 21 points on 7-of-17 attempts. Beal had 16 points while Otto Porter Jr. and Kelly Oubre Jr. each finished with 13 points.

The Celtics are now one win away from advancing to the Eastern Conference Finals and will have two cracks at it, starting in Washington on Friday for Game 6.

The Celtics' efficient offense shot 53 percent from the floor and finished with 33 assists on 46 made field goals. The C's limited themselves to 11 turnovers while defensively -- finished with 7 steals and 8 blocks.