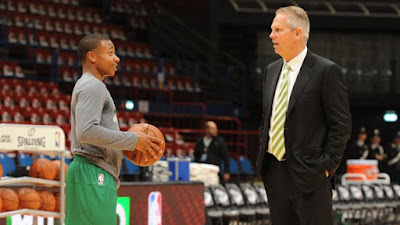 No one knew it at the time but Celtics president of basketball operations Danny Ainge made the biggest steal of his tenure in Boston when he traded for Isaiah Thomas in the final minutes before the 2015 NBA trade deadline.

On February 19, 2015 -- a day that was marked the busiest NBA trade deadline day in 25 years -- the Celtics acquired Thomas from the Suns in exchange for Marcus Thornton and the Cleveland Cavaliers' 2016 first-round pick.

For the Celtics, a team that was teetering between squeezing into the playoffs and entering a second consecutive draft lottery at the time, the deal pushed the ball forward in their rebuilding phase. It was clear Ainge wanted to see his team blossom into a playoff team sooner rather than later, even if it meant a first-round sweep against the conference leading Cavaliers.

However, Ainge had his eyes on Thomas way before 2015's trade deadline. He observed the young prospect before the 2011 NBA Draft and reached out to Thomas moments after free agency opened its doors in the summer of 2014.

Instead of inking a deal with the Celtics, a team with the crowded back court of Rajon Rondo, Avery Bradley and Marcus Smart at the time, Thomas signed a four-year, $27 million contract with the Suns. It was a modest deal but Thomas was still trying to prove himself as a backup point guard at the time. Today, that's a bargain to say the least as Thomas has reached new heights as one of the league's elite scorers.

After Friday's historic performance, he is now fifth in the league in scoring -- averaging 27.7 points a night and it only cost Ainge a late 2016 first-round pick that turned into Scal Labissiere and Thornton -- a backup shooting guard who's currently with the Wizards averaging 8.4 points a night.

Both pieces were acquired by the Cavaliers for the $10.3 million exception created by trading Paul Pierce to Brooklyn.

While Ainge will go down in history as the genius who constructed the 'Big 3' by trading for Ray Allen and Kevin Garnett which resulted in a championship in 2008, the Thomas trade in 2015 bridged the gap into the new era. The emergence of Thomas last season -- who made his first All-Star team -- led to the biggest free agency signing in Celtics history -- Al Horford -- and pushed the ball even further as the C's remain relevant in the east behind the Cavaliers and Raptors.

And Ainge pulled it off by using one of his stockpiled draft picks and a throw-in player. What a heist.

Unlike 2007, Ainge didn't have to give up a No. 5 overall pick like he did for Allen or trade away half of his roster like he did for Garnett. Instead, he traded for a player who was signed to a team-friendly deal and on the verge of becoming a bonafide star.

After trading Rondo in 2014, it looked like Ainge was heading towards finding his next superstar through the draft. Instead, Ainge used the 2014-15 season to build a core that started with Avery Bradley continued with the addition of Jae Crowder (via Rondo trade) and Thomas and topped off by the signing of Horford this past summer.

Now, we await for Ainge's proverbial checkmate move. The deal that will undoubtedly place the Celtics in championship contention. But how will he pull it off?

Franchise-changing players aren't always available via free agency every summer and NBA teams with superstar talent appear to be buyers rather than sellers now a days.

After various suspensions and incidents on and off the court throughout his career, one would think DeMarcus Cousins has overstayed his welcome in Sacramento, but think again. Instead of moving Cousins, the Kings have spent the past seven years hiring and firing coaches in hopes of becoming a playoff team while trying to keep Cousins pleased. Current head coach Dave Joerger is Cousins' sixth coach in seven years.

Seems like the only way the Kings will part ways with Cousins is if he ultimately demands a trade. If or when that does happen, Sacramento will probably spin the revolving door one more time and hope their newest coach can convince their start to stay put.

Last summer, it looked like Ainge was on the verge of forming another Big 3 when a picture of him and Tom Brady heading into a meeting with Kevin Durant emerged on social media. Seemed like the Celtics brass weren't going to let Durant walk out of that meeting until he signed on the dotted line.

However, the thought of taking down LeBron James and the champion Cavaliers alongside Steph Curry, Klay Thompson and the Warriors was too tempting for Durant to pass up.

If there's one thing we know about Ainge -- he sure knows how to make a surprising move right when you think he's out of options. The Celtics president of basketball operations was rumored to be one summer away from trading Paul Pierce after he signed a three-year extension in 2006. Instead, Ainge traded for Allen in the 2007 NBA Draft -- which led to Garnett waiving his no-trade clause and accepting a blockbuster deal to become a Celtic. If Ainge wasn't able to pull off both trades, he would have most likely moved Pierce and started from scratch.

Ten years later, Ainge finds himself in a similar predicament.

The clock is ticking. With Thomas, Bradley and Marcus Smart all due for a pay increase in 2018, Ainge will have to plot his next move accordingly to preserve a strong back court while not allowing one of the aforementioned guards walk without getting anything in return.

The Celtics will most likely not be able to sign all three but one of the three that stands out the most is Thomas -- one of the league's brightest superstars. But in order to cement themselves into NBA's elite, Ainge's biggest move of the Brad Stevens era will have to come soon.

Much like what Ainge did with Pierce in 2006, we may end up seeing Thomas sign a three-year deal before the start of the 2017-18 season -- buying Ainge a little more time to find his next superstar. However, the pressure is on Ainge to utilize his assets to make another franchise-changing move.

Horford and Crowder are the only two rotation players for the Celtics that are signed passed 2018. It'll be interesting to see what Ainge will pull off before next month's trade deadline and throughout the summer as he attempts to construct his second championship-caliber team in 14 years.