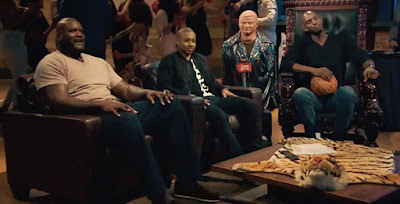 Fresh off his 38-point performance against the now 'hated' Washington Wizards, Celtics guard Isaiah Thomas made a surprise appearance on Kevin Garnett's Area 21 as part of Thursday night's NBA on TNT.

Thomas came baring gifts for KG that included a frame definition of a legal screen and a picture of Garnett with his former Celtics teammate Avery Bradley (who didn't make to trip to Atlanta due to an Achilles injury).

Garnett, who officially became an consultant for the Los Angeles Clippers earlier this week, had nothing but high praise for the Celtics guard. As Thomas joked about Danny Ainge "bringing out the Brinks truck" when the subject of the new CBA was brought up.

"It's coming, because you're earning it," Garnett told Thomas. "I've got you in the conversation for MVP. What you do for your team is huge."

Thomas, who is averaging 28.2 points, 6.1 assists and 2.7 rebounds per game, was joined by recent Hall-of-Fame inductee Shaquille O'Neal, as the two former and current Celtic chatted-up about all things basketball.

'The Big Ticket' also treated I.T. to a steak dinner and his former Celtics teammate O'Neal to a whole roasted chicken on set before a special segment of the famous Shaqtin' a Fool concluded the night roasting Thomas and Marcus Smart.

Oh, can't forget to mention that Garnett dropped yet another obscenity live on the air (m***er-f*****er), good thing it was after one AM. So much for that 'cuss button' KG.

Take a look at some highlights below: