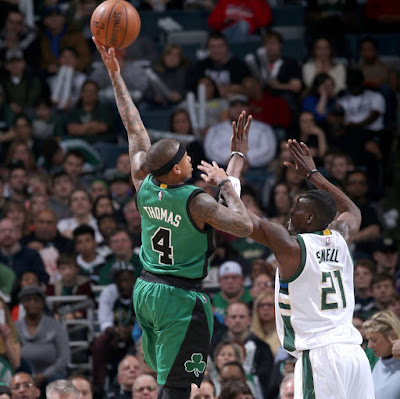 Jae Crowder was back at the BMO Harris Bradley Center on Saturday, a building he knows all too well. He hit his last four free-throws in overtime to secure a 112-108 Celtics win over the Milwaukee Bucks.

Crowder, who played at Marquette between 2010-12, finished his night with 20 points, 6 rebounds and 4 assists.


"It's always special when I come here and we get a win," said Crowder. "I see a lot of familiar faces around the building, including the ushers, stuff like that. It's always a great feeling to come back."

Isaiah Thomas had a game-high 37 points and 8 assists to lead the Celtics to their third straight win.

Giannis Antetokounmpo led the Bucks with 21 points, 6 rebounds, 6 assists, and Michael Beasley added 17 points, 8 rebounds off the bench. Greg Monroe notched a double-double of 14 points and 13 rebounds for Milwaukee, who have loss their third straight and are now 21-16.

Boston scored a season-high 42 points in the first quarter, and they seemed in control for most of the game before they squandered a 16-point second half lead

In the extra frame, the Celtics build a six-point advantage when Tony Snell hit back-to-back 3's to tie it up at 108 a piece.

With 28 seconds remaining in overtime, Jae Crowder hit two free-throws and 10 seconds later, Anteokounmpo missed a contested shot at the rim while Crowder was fouled on the next C's possession to ice the game.


"I thought we played pretty darn well, to be honest, and then defensively and in the overtime I thought we were excellent, " Brad Stevens said after the the Celtics win.

Boston is now 29-18 and tied for the second best record in the Eastern Conference, along with the Toronto Raptors, who they will host at the TD Garden on Wednesday night.

Until then, the Celtics will head back home to take on the Detroit Pistons (21-26) on Monday. Tip-off will be 8 PM on TNT

Isaiah Thomas has extended his streak of scoring 20 or more points to 31 straight games (leads NBA) and 30 points or more 16 times this season. Al Horford (sore groin) missed his second outing and did not travel with the team. Avery Bradley (sore Achilles) missed his sixth consecutive (10 of the last 11 games). No word if either will be available this week for the Celtics.