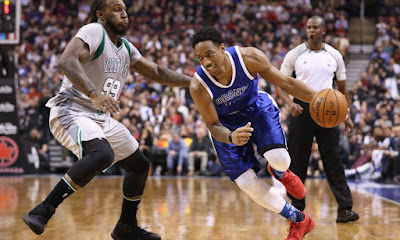 The Raptors once again proved why they're not letting go of that Atlantic Division crown anytime soon. DeMar DeRozan took full advantage of Avery Bradley being out of Boston's lineup as he lead Toronto to a 16-point comeback in a 114-106 victory over the Celtics at the Air Canada Centre on Tuesday night.

DeRozan finished with 41 points (19 in the third quarter) and a career-high 13 rebounds, while Kyle Lowry added 24 points and 9 rebounds. Jonas Valanciunas chipped in 18 points and grabbed a career-high 23 rebounds for the Raptors, who haven't lost three-games in a row in over a year.

Isaiah Thomas led Boston with 27 points, 7 assists and Marcus Smart, who started for the injured Bradley added 16 points, 5 assists and 4 rebounds. Al Horford contributed with 14 points and 9 rebounds while Gerald Green also scored 14 points and grabbed 5 rebounds. Kelly Olynyk chipped in 13 points off the bench in the Celtics' only third loss in the last 13 games.

Boston led 55-46 at halftime before pushing it to a 16-point advantage midway through the third quarter. With 2:41 left, Kyle Lowry hit a go ahead 3-pointer, but the Celtics regained a 84-80 lead by the end of the period.

In the final frame, the Celtics would maintain their lead despite DeRozan hitting jumpers and driving through the lane for open layups until the three-minute mark. An Al Horford turnover in the midst of Toronto 9-0 run, put the Raptors ahead 104-102. The Celtics would only score two points the rest of the way as costly turnovers and DeRozan converting 3-point plays at the free throw line was too much for the C's to overcome.

Toronto finished the fourth quarter on a 23-6 run to secure the win and a second place record of 25-13 in the eastern conference.

The Celtics still had a chance to win and pull even with their division rivals even though they were out-rebounded by the Raptors 50-33.


"We gave them fouls and offensive rebounds. They took advantage of that," said Isaiah Thomas. "That's probably the big thing. If we would have got a few more stops, we would have been all right."

Boston is now 23-15 on the season and two games behind Toronto in the Eastern Conference standings. They will head home to take on the Washington Wizards (19-18), who already own a win over the Celtics. Tip-off is on Wednesday night at 8 PM from the TD Garden.

Avery Bradley missed his second straight game with a strained right achilles tendon, all signs indicate he will return Wednesday against the Wizards. Boston now has a 6-2 record against teams in the Atlantic Division this season, both defeats have come at the hands of the Raptors.