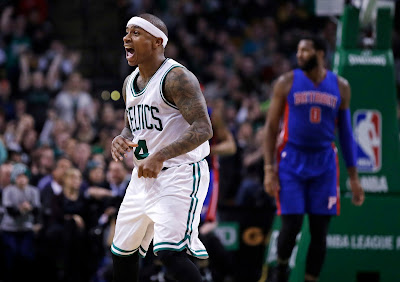 Topping off one of the best scoring months in franchise history, Isaiah Thomas' 24-point fourth quarter performance against the Pistons was an emphatic exclamation point to an amazing month of January.

The two-time All-Star scored a game-high 41 points in a 113-109 Celtics win over the Pistons at TD Garden, leading his team to their fourth straight victory and ultimately guiding them to a one-game lead ahead of the Raptors (29-19) for second place in the Eastern Conference.

His 41 points on Monday pushed his average up to 32.9 points per game for the month of January -- the third-highest scoring month in Celtics history behind Larry Bird and Paul Pierce.


"That doesn't even seem real," Thomas said. "It doesn't sound real. So many great players who did it before me, to have my name up there with those legends is unbelievable. I'm going to just keep going, keep trying to catch those guys, and keep winning."

The Celtics (30-18) win also sets the stage for Wednesday night's big showdown between the two best teams in the Atlantic Division. The Raptors have had the Celtics' number throughout the season -- beating them twice over the last two months. But if Thomas can continue this amazing streak of excellence that he's on, it could be enough for the Celtics to pull out a win against DeMar DeRozan, Kyle Lowry and company.

Along with averaging 32.9 points in January, Thomas also set a season-high average of 6.9 assists per game. Jae Crowder, one of many of Thomas' beneficiaries in the starting lineup, is also finishing with his best month of the season -- averaging 16.3 points while shooting 50.3 percent from the floor, including 46.6 percent from behind the arc.

Guys like Marcus Smart (10.9), Kelly Olynyk (10.6) and Jaylen Brown (6.2) are all coming off of a month where they've played some of the best basketball they've played all season, they're all averaging season-highs in points, respectively, but no player has been more consistent than Thomas. The MVP candidate is continuing to put the C's on his back and lead them to victories while quickly becoming one of the best scorers in the league, averaging 29.4 points a night, second behind Russell Westbrook (30.8).

His amazing month of January has certainly translated into wins as the Celtics finished the month with a 10-4 record and timing couldn't have been any better. After a three-game skid, the Celtics have strung together a handful of wins while their most-feared competitors in the conference have been playing some of the worst basketball they've played all season.

The Raptors have lost six of their last seven games, while the Cavaliers have dropped four of their last six. All of a sudden, the Celtics find themselves only 2.5 games behind the NBA champs.