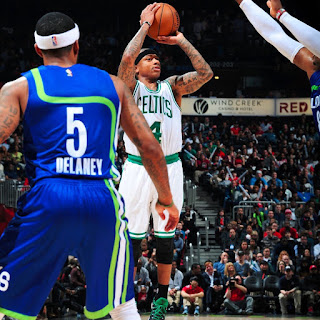 Isaiah Thomas did it again.

This time, Thomas topped off a dramatic, 13-point fourth quarter performance by knocking in a game-winning jumper with 2.4 seconds left in a 103-101 win over the Hawks.

Atlanta wiped away a 20-point second-half deficit -- when Paul Millsap's 3-pointer tied the game at 101 with 25 seconds left.

With 3:38 left in the game, Tim Hardaway Jr.'s layup pulled Atlanta to within five points. After Isaiah Thomas made a pair of free-throws to extend the Celtics' lead, the Hawks went on a 5-0 run -- making it a two-point game (94-92).

Out of a Celtics timeout, Olynyk was fouled down low and connected on both of his free-throws. From there, Thomas put the Hawks away by scoring all of the Celtics last seven points.

He followed up a jumpshot in the paint with a 3-pointer in front of his team's bench -- extending the Celtics' lead to six (101-95). But he wasn't done yet. After Hardaway Jr.'s 3-pointer made it a one possession game and Millsap's 3 tied things up, Thomas had the last laugh with a go-ahead bucket that gave the Celtics their second straight win and snapped the Hawks' seven-game winning streak.

Thomas finished with a game-high 28 points, 9 assists, Olynyk scored 26 points and pulled down 8 rebounds, while Jae Crowder flirted with a double-double (18 points, 9 rebounds).

Millsap and Hardaway each scored 23 points to lead the Hawks. Malcolm Delaney finished with 17 points and Kent Bazemore added 12.

The C's got out to a quick start by nearly scoring all of their first quarter points from behind the arc -- they drained 8-of-14 from deep en route to a 28-18 lead. The second quarter, however, told a much different story as the Celtics went 0-for-8 from outside, before Olynyk and Thomas finished the first half by knocking down back-to-back 3-pointers in final minute.

Olynyk's 3-pointer topped an 18-point first half for the back up big man -- who lead the team in scoring at halftime. It was easily his best half of the season.

After his hot start, Olynyk started the second half in place of Amir Johnson and the Celtics continued to rain down 3-pointers at the Philips Arena. They followed up on the pair of 3-pointers that ended the half with four long balls in the first four minutes of the third quarter. A 17-4 run gave them a 65-52 lead.

But unlike the second quarter -- where the C's were outscored 26-20 -- the Celtics weren't just chucking up 3-pointers throughout the third quarter. Boston used a well-balanced attack of completing backdoor cuts for easy layups, while also pouring in six more 3-pointers in the quarter. By the 3:23 mark, the C's held a 20-point lead (77-57) -- their biggest advantage of the night.

However, the Hawks fought back with a run of their own -- a 8-1 run -- and cut their deficit down to a 13-point difference (78-65) before the final frame. The Celtics were able to hold off Atlanta's comeback in the final minutes behind Thomas' big-time fourth quarter that ended with a game winner.

The Celtics will have the next two days off before they take on the Hornets at TD Garden on Martin Luther King Day.

For the second straight night, the Celtics knocked down 17 3-pointers. Al Horford, who made his return to Atlanta for the first time since signing with the Celtics this past off-season, received a special video tribute at the Philips Arena. Horford received a mixed reaction of boos and cheers before eventually receiving a standing ovation full of cheers from the Hawks fans in Atlanta.