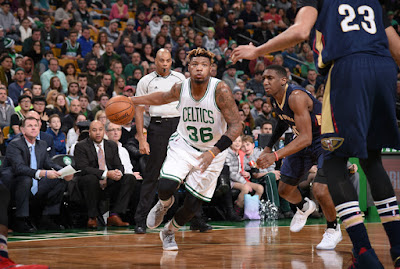 The Celtics continue to live and die by the 3.

It's been their m.o. lately and made a difference in their 117-108 win over the Pelicans. The C's have now won four consecutive games, including 10 of their last 12.

Luckily for the Celtics, they have been living well from deep. Throughout their last four games, the C's shot 51 percent on 71-of-139 attempts from outside.

Fresh off their win against the Sixers -- where they drained 19 3-pointers, a new franchise record -- the C's carried over their streak of hot outside shooting against the Pelicans. Boston flirted with the franchise's 3-point record while shooting 50 percent from the floor on 18-of-36 attempts from deep.

Isaiah Thomas (38 points) and Marcus Smart (22 points) were on fire -- they combined for 11-of-18 from 3. Gerald Green's 15 points, including 2-of-3 from behind the arc, led the bench while Kelly Olynyk finished with 12 points, four rebounds and four assists.

Led by Anthony Davis' 13-point first-quarter, the Pelicans grabbed a 10-point, first half lead before the Celtics found their offensive momentum. The Pelicans big man finished with a monster double-double (36 points, 15 rebounds) but his big-time performance was no match against the Celtics' outside touch combined with a 38-point night by Thomas, who has stretched his streak of scoring 20-plus points to 12 consecutive games -- the longest streak in the league.

Smart, who got the start over Avery Bradley (sprained Achilles), put together his best scoring night of the season, Smart knocked in a season-high 5-of-7 from outside and finished with 6 assists, 5 rebounds and three steals to go with his 22 points. He was locked in on both ends of the floor and triggered excellent ball movement throughout his teammates on the offensive end.

However, it's going to be interesting to see how the Celtics will perform when the 3-pointers aren't falling. The C's are shooting 36.5 percent from outside this season -- good enough for ninth in the league -- yet, there isn't one player in this team's rotation who is afraid to attempt a 3-pointer, even Amir Johnson will rarely pass up an open 3.

They may find out how tough it is to win a game without making 17 or 18 3-pointers, like they've done in three straight games, in Toronto when they take on the eastern conference's second-best team in the Raptors (24-11) on Tuesday night.

Against one of the leaders in rebounding, the Celtics managed to out-rebound their opponent, 47-42. Anthony Davis may have pulled down 15 boards individually but controlling the glass certainly helped jump-start the offense. The C's scored 24 second-chance points off of 15 offensive rebounds.