Former Celtic Evan Turner reflects on special friendship with Brad Stevens: 'He put me in a position to be successful' 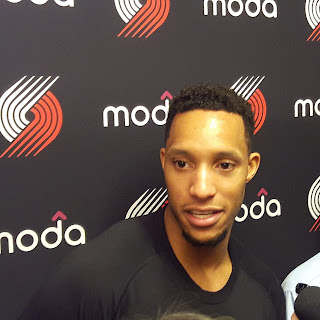 While reminiscing on his time spent in Boston, former Celtic Evan Turner shared how much he misses the city and how him and Stevens formed a friendship -- one that he doesn't take for granted.

Turner, who played two seasons in Boston before signing four-year, $70 million deal with the Trail Blazers last summer, says while Stevens was a great coach to him and his teammates throughout his tenure in Boston and says he's responsible for re-energizing his career.


"Obviously as a coach, he's a was a great coach," Turner said. "He helped me figure out myself and a lot of guys in the locker room's career, re-energized it. I just always thought he was a great, classy person. A sincere individual. Never thought he was too big and he does a lot of great things but I really appreciate the friendship I was able to form with him and get to know what type of guy he is. Very special person, special coach. It makes a lot of sense why he's had so much success throughout his career because he's a good individual and his mentality stuff has definitely helped me learn how to be a pro and how to see bigger picture, point of views.

"He put me in a position to be successful," Turner explained.

After coming off a season where they finished fifth in the Western Conference and reached the Western Conference semifinals, the Trail Blazers (18-27) have gotten off to a rotten start this year. They're currently on a four-game losing streak and will look to bounce back from their loss against the lowly 76ers in Philadelphia on Friday.

Turner also recalled the chemistry he shared with his former teammates and how special it was to play for the Celtics -- a storied franchise with a strong fan base.


"We had a great team, we had great chemistry among our team," Turner said. "I think that's what I really recognized. Not saying we don't here just in the locker room, the locker room feel was kind of rare. I definitely appreciate that the most. You know, playing at the garden was dope. Putting on a jersey was definitely dope. You don't take it for granted, this isn't like a normal franchise. Sell-outs and all that stuff. You don't take that for granted. I definitely miss that."