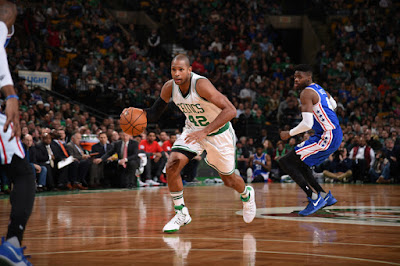 Once the 76ers built a 14-point, third-quarter lead -- their largest of the night, there was an eerie feeling at TD Garden.

The Celtics -- winners of eight of their last 10 games -- had their hands full against the lowly 76ers. But two of their best offensive weapons -- Avery Bradley and Al Horford -- found their rhythm when the Celtics needed it most, and led their team a 110-106 win.

After Isaiah Thomas drained a 3-pointer before the two-minute mark of the fourth quarter, the Celtics grabbed a four-point lead before the 76ers outscored their opponent 5-1 in less than a minute -- behind a dunk by Joel Embiid and a 3-pointer from Gerald Henderson -- and tied the game at 104.

In the final minute, the Celtics had two chances to break the tie but came up short when Thomas' layup was halfway down the hoop before it rolled out and Avery Bradley had his 3-pointer blocked by Henderson. On the other end of the floor, Embiid knocked in a pair of free-throws to give Philly a two-point lead (106-104) on a shooting foul committed by Al Horford.

However, Horford got the last laugh at the end when the Celtics' play out of a timeout found him in the corner for a go-ahead 3-pointer (107-106). The C's made back-to-back stops in the end and pulled away with their third win in a row.

Bradley led the Celtics with a hot offensive start with 14 first-quarter points, including 3-of-4 from deep but the 76ers stayed on Boston's heels until they grabbed a big lead just before halftime. The Celtics gave up a season-high 39 second-quarter points and trailed Philadelphia 62-51 at the break.

Despite scoring 10 3-pointers in the first half, the Celtics were sloppy offensively as the 76ers' defense forced 10 Celtics turnovers. On the opposite end of the floor, no other 76ers had a better half than Embiid -- who had 17 points and four rebounds before the start of the second half.

However, the Celtics' offense woke up midway through, led by Bradley's 12 points in the quarter and triggered by a number of defensive stops. The C's held Philly to only 18 third-quarter points.

With 2:47 left in the third, Bradley scored a backdoor layup that cut Celtics' double-digit deficit down to six points and by the start of the final frame, the C's were trailing Philly by only two (80-78). At the start of the final frame, Smart's mid-range jumper tied things up and Kelly Olynyk's 3-pointer from the corner gave the C's their first lead since the first half (83-80), topping off a 17-4 Celtics run.

In a tie game, Thomas returned to the floor with 4:37 left. He made an assist to Horford for his third consecutive 3-pointer. Horford scored 14 fourth-quarter points and hit the biggest shot of the night when his 3-pointer from Olynyk in the corner ended up being the game winner.

The Celtics will have little time to rest before they host the New Orleans Pelicans at TD Garden tomorrow night, where they will look to make it four consecutive wins.

After tying the franchise record (17) in two straight games for most 3-pointers made, the Celtics surpassed that mark against the 76ers (19) when Thomas drained a 3-pointer late in the final minutes of the game and was topped by Horford's game winner. It was certainly a live-or-die by the 3 kind of night. The C's shot 47.5 percent on 19-of-40 from downtown.