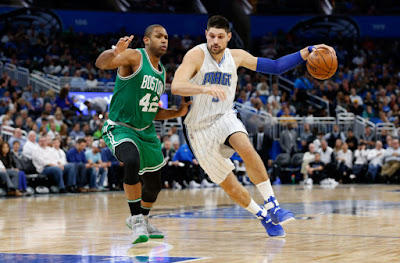 Call it great timing or simply a coincidence that the Celtics just so happened to be playing against 7-foot Nikola Vucevic and the Orlando Magic on Friday when news broke earlier in the day that Danny Ainge could potentially be looking to deal for the 26-year old center.

According to CSNNE.com the Celtics have had talks with the Magic about a possible trade involving double-double stud Nikola Vucevic. No details of what either sides is willing to offer have come to light yet, but the thought of boosting the C's front-court with scoring and rebounding might be too good to pass up, especially if there's not many pieces needed to pull the trigger.

Despite a Magic blowout loss to the Celtics at the TD Garden, where Vucevic finished with 14 points and 7 rebounds in limited minutes (23), the big man is averaging 14 points, 10 rebounds and 3 assists per-game this season and has also posted 19 double-doubles on the year (the C's as team have 21).

Vucevic has been no stranger to trade rumors throughout his time in Orlando, who have not made the playoffs since the departure of Dwight Howard (which was what brought him to the Magic in 2012). He was asked how he handles the constant speculation of being dealt due tho his team is not winning.


"You try not to pay too much attention to it and focus on what you can do," said Vucevic. "There's been a lot of rumors about me this season. I haven't paid attention to it. It's all rumors; you can't control them. At the end of the day, what happens, happens." [CSNNE.com]

Add Vucevic to the list of 'possible centers' Ainge has had his eye on all season which include names such as the Sixers' Nerlens Noel, Jahil Okafor and most recently former Milwaukee Buck; Larry Sanders, who is looking to make a comeback into the league after being away for two seasons.

The 28-year old Sanders worked out with Celtics this week but no imminent signing looks to be in the works.

The NBA trade deadline is on February 23 and Vucevic would be considered an upgrade at the five-spot, something the Celtics have been looking for since last summer. Though not a rim protector, he does everything else pretty well.

It will come down to what Ainge is willing to give up to acquire Vucevic, who is on a team-friendly deal that will pay him $11.75 million this season and $12.75 million each of the next two seasons (through 2018-19') on a $53 million rookie extension contract he signed back in 2014.

Considered what quality big-man are currently making and what most are set to make in upcoming seasons, if Ainge can pull off this deal, it will once again prove that he's undoubtably the 'king' of trading for bargains.