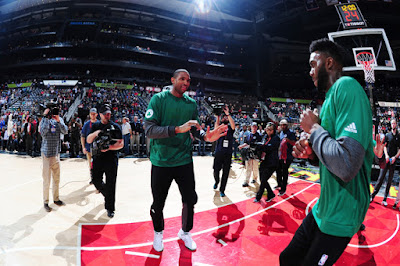 Al Horford says he didn't see it coming but when his name was announced during pregame introductions the boos came raining down from Hawks fans in attendance at Philips Arena.

Horford, who played his entire nine-year career with the Hawks, faced his old team for the first time and was greeted with unpleasant jeers moments before tip-off.


"They were unexpected," Horford said. "I don't want to say anything, but it is what it is. I know there's a lot of fans out there that appreciated my time here, and I appreciate them."

The Hawks selected Horford at No. 3 in the 2007 NBA Draft and since then Atlanta has reached the postseason in all nine seasons of his tenure with the Hawks, including a trip to the 2015 Eastern Conference Finals. Before his arrival, the Hawks hadn't reached the playoffs in eight straight years. He's also a four-time All-Star and is certainly considered to be one of the franchise's all-time greatest players.

Isaiah Thomas, who drained the Celtics' game-winning shot with 2.4 seconds left, says him and the rest of his teammates really wanted to win the game for Horford. He also went on to say that he felt Hawks fans disrespected his teammate by booing him simply for choosing to sign with the Celtics during the off-season.


"(A win for Horford was) all we wanted," Thomas said. "That's all we wanted. I heard a few boos at the beginning when they called his name but I'm glad they appreciated him when they did a standing ovation because he's a hell of a -- not just basketball player, but a hell of a guy. And we needed to get that win for him. We knew it was big for him.

Horford eventually received a video tribute at Philips Arena during the first timeout of the second quarter. As he and his teammates watched the video, Hawks fans eventually showed their appreciation for Horford by giving him a standing ovation at the end of the video montage.

Before the game, Horford told the media that he believes his decision to sign with Boston was undoubtedly the right one. And that he can't wait to see what his future holds as a member of the Celtics.


"I feel we have a team that can keep improving," Horford said. "And we have a chance to do some special things. And I want to be a part of that."