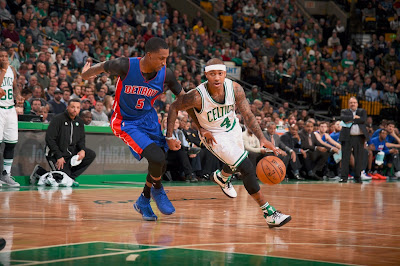 Isaiah Thomas entered Monday night leading the NBA in fourth quarter scoring 10 points per game before pouring in 24 in the final frame of the Celtics 113-109 win over the Pistons.

Thomas put on a clinic in front of the TD Garden faithful once again as he finished with 41 points (11-23 from the field) and 8 assists to lead the Celtics to their fourth straight win.


"He was unbelievable again," said Brad Stevens. "They kind of kept us off balance with their coverage so we just tried to get him off the ball some. And then when he got going late, he just got going so it didn't matter he was off the ball or on the ball."

It was the fourth time this season the All-Star guard totaled at least 40 or more points.

Jae Crowder added 21 points, 8 rebounds while Marcus Smart chipped in 13 points and 8 assists off the bench. Al Horford (groin) returned after a two-game absence and notched 13 points, 6 rebounds and 6 assists for Boston, who are now 30-18 on the season.

Andre Drummond led the Pistons with a double-double of 28 points, 22 rebounds and Kentavious Caldwell-Pope finished with 18 points. Tobais Harris contributed with 15 points in 30 minutes off the bench for Detroit who have lost three straight and are now 21-26.

The Pistons for the most part held Thomas in check, especially in the third quarter as they only allowed the C's point guard to score four points.

But the Celtics created some separation once the fourth quarter got underway and Thomas got going.


"I always just try to get a little more aggressive to score, to make plays," Thomas said. "They started switching a lot in the fourth quarter and then Brad calls in some really good plays to get the spacing right. We had nice spacing, things opened up for me and I just took advantage of it."

Boston led 109-107 with 31 seconds remaining before the Pistons had a chance to tie the game after a Celtics back-court violation. Reggie Jackson (12 points, 6 assists and 6 rebounds) missed a driving layup and Jonas Jerebko grabbed the rebound, his 10th of the night. Detroit fouled Thomas, who hit two free-throws followed by two more with 7.5 seconds left to end the night a perfect 15-of-15 from the charity stripe.

Boston currently holds a one game lead over the Raptors, who are 29-19 for the third best record in the Eastern Conference. The C's will look to extend their win streak to five when they face Toronto on Wednesday night.  Tip-off from the Garden is at 7:30 PM.

As of Sunday night the Celtics have grabbed sole possession of in the Atlantic Division lead for the first time since December 20, 2013

Isaiah Thomas has now scored at least 20 points or more in 32 straight games and finished the month of January with an average of 32.9 points per contest, the third highest monthly average in franchise history (behind Larry Bird 33.1 PPG in February 1988 and Paul Pierce 33.5 PPG in February 2006). Avery Bradley (sore Achilles) missed his sixth consecutive game, his return is still unknown.