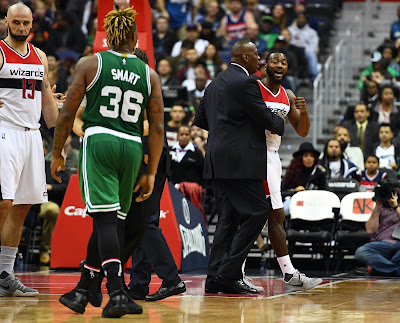 In response to their scuffle with the Celtics that took place two weeks ago at TD Garden, the Wizards are planning to wear all black to Tuesday's home game against the C's.

Following Washington's 109-99 win over the Hornets on Monday, Wizards forward Kelly Oubre Jr. was the first to reveal the team's planned dress code for Tuesday's game against the Celtics.


"We're wearing all black to the game. You know where we're going with that," Oubre Jr. told reporters in Charlotte, North Carolina.

When Wizards point guard John Wall was asked about what his teammate said about the team's attire, he reiterated, "All black everything. A funeral."

These two teams are clearly not quite fond of one another due to their past tussles but for the Wizards to take it to this extreme is a bit odd.

However, either way, both sides are clearly fired up for this regular season matchup. Although the Wizards may be taking things a bit more seriously than their opponent, Celtics forward Jae Crowder reminded reporters that the last incident between the two teams cost him money -- the biggest reason why he says he won't be doing much trash talking on Tuesday, well, not towards Wizards, at least.

Crowder, who accused former Wizards coach Randy Whittman of using obscenities towards him as the two engaged in a shouting match last season in January in Washington, was in the center of the melee between him and Wall at the end of the Celtics' 117-108 win on Jan. 11 at TD Garden.

The scuffle didn't end there as Crowder and teammate Marcus Smart were reportedly looking for Wall outside of the Wizards' locker room shortly after the game. Officers had to be called over to prevent anything from happening.

Crowder was fined for initially tapping Wall's face (well, his nose) before Wall touched Crowder's cheek. The NBA also issued a fine to Wall for $15,000.

Wizards forward Otto Porter Jr. then accused the Celtics on being a dirty team after the game -- an accusation that Thomas vehemently denied.

In their first meeting on November 9 in Washington D.C., it was Smart and Wall that were the center of attention when they got into each other's faces in the fourth quarter of the Wizards' 118-93 win. Wall committed a Flagrant-2 foul on Smart when he threw Smart on to the floor -- that's when Smart jumped up and had a few words for the All-Star point guard.

With the season series tied 1-1, this will be the third of four meetings between the Celtics and Wizards. The fourth and final game will take place on March 20 at TD Garden.