Win over Magic reminded us of Jaylen Brown's potential 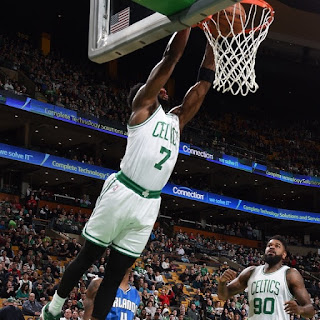 Not many people had high expectations for the league's No. 3 pick Jaylen Brown this season.

In fact, the Celtics were criticized for their selections by most critics when the So. Cal product's name was announced in last summer's NBA Draft.

But if there's one thing that we can take away from the Celtics' 128-98 lopsided win over the Magic, it was that Brown has the potential to blossom into a viable scoring option for the Celtics, much sooner rather than later.

For the second straight night, Brown started in the backcourt in place of the injured Avery Bradley (right Achilles) and finished with a season-high 20 points to go with his eight rebounds. Sure, this was against the Magic (18-29) -- the third worst team in the Eastern Conference -- but the rookie still gave you a glimpse of how valuable he could be in less than three months from now when Brad Stevens will be competing to win his first NBA playoff series.

Whether it was because he started in place of Avery Bradley for the second consecutive night or the fact that he was left off of the roster of the BBVA Compass Rising Star Challenge at All-Star Weekend, Brown played with a chip on his shoulder. He played with a sense of urgency. After scoring nine of his 13 first-half points in the game's opening seven minutes, Brown was dialed in.

The third overall pick was active on defense, crashing the glass for boards and was assertive on offense. Doing what he does best when the ball is in his hands, Brown took his defender to the hoop. Sometimes he finished, sometimes he missed, sometimes he kicked it out, other times he earned trips to the free-throw line but what was promising about his game was his knack for wanting to make plays.

Did not being invited to the game that showcases the best NBA rookies and second-year players play a factor in Brown's focus?


"You could say that," Brown said. "It's all fuel to the fire but it's not the end of the world, just have to get better, continue to get better and come out and show why I'm one of the best rookies."

When asked about his rookie's best game of the season, Stevens pointed to Brown's work ethic and mental focus.


"He works really hard at it. We talk all the time," Stevens said. "We've made mention that playing minutes is certainly a part of the development experience but there's a lot more that goes into that. He spends a lot of time studying, he had a great workout yesterday on an off-day when he came in and put a lot of time in on both ends of the floor. I thought he did a lot of good things. The hard part in this league is being able to do it every night and doing it over and over and over again. But he's certainly a guy that's continuing to put in the work and certainly is capable of becoming a guy that is very consistent."

Brown, who declined an invite to participate in All-Star Weekend's Slam Dunk Contest so that he could "focus on being ready to help this team," shows you where his head is at as a rookie who's serious in trying to become a vital piece for the Celtics.


"He's serious. I didn't even know about the dunk thing," Stevens explained. "That invitation doesn't go through me or anybody that I talk to. But I understand it's an honor to be invited to things like that but I also understand the desire to be able to get off your feet, work on your game or rest. I think that's part of the all-star break. I think ultimately, he is a guy that will put in the time and become good. Hopefully, he can continue that."