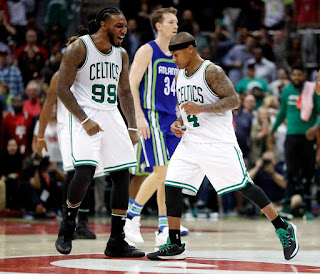 'All right, go win the game,' Celtics coach Brad Stevens recalled telling Isaiah Thomas moments before his All-Star point guard made one of the biggest shots of the season.

After Hawks forward Paul Millsap drained a 3-pointer to tie the game with 25 seconds left, Thomas immediately looked at his coach and told him not to call a timeout before calling an isolation play that left him in a one-on-one battle against Hawks guard Kent Bazemore.

Thomas dribbled down the clock, headed to his right, stopped and knocked in a step-back jumper right in front of his coach and teammates.


"Usually you'd call timeout in that situation, but he actually -- I could see him down the court, kinda wave off the idea of a timeout," Brad Stevens explained. "I told him, 'All right, go win the game.' That's what you have to do if you wave off an idea of a timeout. I trust him to do that, and ultimately, he's made so many big plays you believe in your guy."

Thomas is quickly making a name for himself as one of the best scorers in the NBA -- currently tied with DeMar DeRozan for fourth in points per game, averaging 28.2 points a night --  and has added "King of the Fourth Quarter" to his reputation. This season, Thomas leads the league in fourth-quarter scoring, averaging 10.7 points a game in the final period.


"I think [Stevens] was trying to call timeout at first. Then he was trying to do a play to run a pick-and-roll, but I called it off a little big," Thomas said. "And he trusts me. At the end he said, 'hell of a shot.' It was something I wanted to try to take advantage of.

"Bazemore had that look in his face like he was going to get a stop, and I had other plans."

Thomas' game winner topped a 13-point, fourth quarter performance against a team that entered the Friday night's game on a seven-game winning streak and was closely behind the Celtics for third place in the Eastern Conference. Now, the Celtics (25-15) have not only created some space between third and fourth, they're now only 1.5 games behind the Raptors (26-13) for second.

He's also currently on a 34-game streak of scoring at least 18 or more points -- the longest streak in the league. Before Friday's game, LeBron James was second to Thomas with 17 consecutive games -- a streak that was snapped last night in the Cavaliers' win over the Kings -- where James finished with 16 points.