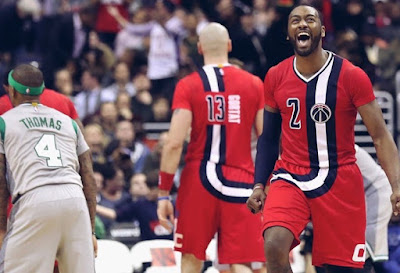 The Washington Wizards arrived to the Verizon Center dressed in black 'funeral' attire as they openly were looking forward to hosting the Celtics in round three of this heated season series.

John Wall added 27 points to go along with his 7 rebounds and 7 assists. Markieff Morris scored 19 points and grabbed 11 rebounds while Marcin Gortat added 16 points and 8 rebounds for the Wizards, who are now 25-20 on the season.

Isaiah Thomas finished with his fourth double-double of 25 points and 13 assists to lead the C's while Al Horford scored 22 points and 4 assists. Jae Crowder chipped in 17 points and Marcus Smart added 13 points and 5 rebounds in the Celtics' third straight loss.

In a much anticipated meeting between these two teams, especially after Boston's win nearly two weeks ago that included a Crowder-Wall dust-up, the Wizards made it a one-sided affair in this 'grudge match.'

Washington never trailed once and were able to sustain a double-digit lead for most of the night especially in the second half (three separate 12-point leads). Beal pushed the Celtics' deficit to 13 (110-97) as he converted a 3-point play late in the fourth quarter.

A few possessions later, Wall's dunk followed by another 3-point play sealed Boston's fate as the Wizards led 119-104 with just under two minutes to play.


"They got whatever they wanted on the offensive end," said Jae Crowder, who stressed the point that there was no extra meaning behind the loss for the Celtics.

"I don't think it's a rivalry," he added. "They won the game tonight. Next question."

For the second time in two months, the Celtics suffered a blowout loss in D.C. and now trail 2-1 in the season series with one more meeting left on the schedule. The Wizards head to Boston on March 20.

In the meantime, the Celtics, who are now 26-18, look to snap their losing streak when they take on the 34-14 Houston Rockets at the TD Garden on Wednesday night. Tip-off is at 7:30.

Boston allowed the Wizards to shoot 57.8 percent from the field (including 45-percent from deep). Isaiah Thomas continued his NBA leading streak of scoring 20 or more points for the 28th consecutive game. Tyler Zeller was available for the first time after missing the last 10-games with a sinus infection. He received a coach's decision DNP.