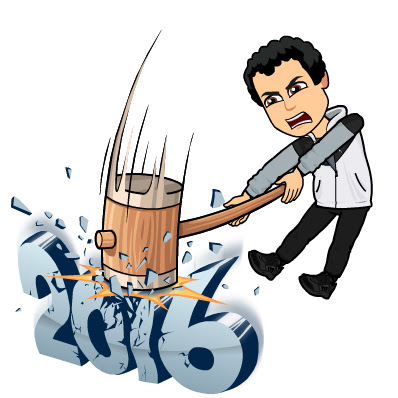 It's been said that 2016 was the worst year in a very long time, but it depends how you look at it. From a personal standpoint, it most definitely was not my favorite. I felt like many lost family members and friends through a fast-paced year and many changes forced us to remember what was once good long ago.

But how do we usually measure goodness in our lives?

By how they made you feel, right? For the most part, thoughts of your childhood is what usually comes to mind at times of sadness, especially when someone or something special you've known literally your entire life, is no longer around.

It almost seems like we were at our most happiest when we had to stand on our tippy-toes to brush our teeth over the bathroom sink. My mom once told me; most of our best dreams subconsciously come from a time period in your life where you were truly happy. There is no surprise that I still have the occasional dream as a 10-year old riding my bike through the old neighborhood during those classic Boston summer days.

When I think back, maybe as children we were just happy and we just didn't know it and after a year like 2016, we long for simpler times to forget our harsh reality, if only for a little bit.

Sports, music and movies have always been the moments that have distracted me from life just long enough to also learn from them at the same time.

Being an avid basketball and Celtics fan for over the better part of the last two and half decades, I've seen players come and go through the NBA and for the most part there is not much afterthought.

From Michael Jordan winning six championships in eight seasons to Hakeem Olajuwon revolutionizing the big man role, and LeBron James pretty much making up his own position, there's only been a selected few that have honestly made an impact on me.

This past year not one, but three greats decided to hang up their sneakers for good and call it a career. (Technically four, as the greatest 3-point shooter of all-time officially retired after a two-year hiatus)

Kevin Garnett, drafted by Minnesota, entered the NBA a skinny 18-year old kid in 1995, I was 11 at the time and for the next two seasons, another teenager by the name of Kobe Bryant got drafted, then traded to the hated rival Lakers, and finally Tim Duncan, who was the chosen one in Boston before San Antonio lucked out and grabbed the number one pick in 1997 and as they say, the rest is history.

All three of these future, first ballot hall-of-famers had a connection to the C's in one way or another.

While most of the 90's and a better part of the early 2000's were not kind to the Celtics faithful, all three players were great to watch on their respective teams. Though Kobe had a rookie workout in Boston prior to the 1996 draft, the Celtics brass felt like Antoine Walker was the better choice (which they were right about for the first 3-4 years). Despite having more ping-pong balls than the Spurs in 1997, the chance to grab Duncan was simply out of their hands and not meant to be.

Garnett, however would make his arrival in Boston 12-years and one league MVP award later, to which we as Celtics fans were unaware what we were about to bare witness to at the Garden for the next six-years.

Three trips to the Eastern Conference Finals, two NBA Finals appearances, one championship later and the phrase 'all good things must come to an end' never rang more true than the moment I watched Kevin Garnett and Paul Pierce (who also recently announced he'll retire at the end of 2016-17 season) hold up a Brooklyn Nets jerseys in the summer of 2013.

Now three years later, the 'Big Ticket' joined Kobe Bryant and Tim Duncan as the newly retired members of what I to called the 90's era: The last of a dying breed in today's NBA.

As I watch Area-21, an added new segment to NBA on TNT as part of Thursday night's basketball coverage. Kevin Garnett and a weekly guest both breakdown the games during commercial breaks of TNT's double-headers and give input at the end of the night during the world famous Inside the NBA.

I've noticed KG clearly misses the game he's played nearly all of his life every Thursday night when I tune in to watch his segment. It's almost seems like Garnett didn't want to retire just yet, unlike like the latter two, who claim that 'basketball just wasn't fun anymore.'

Kobe announced he would retire and after a four-month 'farewell tour' he dropped 60-points in the last outing of his career in a meaningless game. Tim Duncan's number-21 is already hanging in the rafters in San Antonio, only a few months after he officially summited his paper work.

But Kevin Garnett, arguably the best power-forward of all-time, didn't so much as get a day of recognition on NBATV. Instead they played games from the 2016 Western Conference Finals (where Kevin Durant choked away a 3-1 lead to the Warriors before joining them) throughout that week in September when news of KG's retirement broke.

The former Ubuntu leader of the Celtics never captured his covenant second championship ring, while Kobe and Duncan have won 10-championships combined in two-decades.

2016 has been a reminder of what is quickly fading in today's NBA. It's now a league full of the new generation 'stars' who have one good season or two and get called 'the greatest of all-time' by ESPN and other outlets before they truly reach their full potential. It's no wonder why legends have said it's just not a fun game to watch anymore.

Social media has made it so that casual 'fans' only focus on one aspect of basketball; the highlights. Most 'fans' now form their opinions and start arguments on Facebook and Twitter based off what's trending versus actually watching games (yeah I know, crazy huh?).

Hell, social media pretty much elected the next president of the United States when you think about it... but I digress...

The jury is still out when it comes to what people truly believed happened in the 2016 NBA Finals.

Did LeBron and the Cavaliers (first title in their franchise history of 50 some odd years) actually beat Golden State (after being up 3-1) or did the league's best regular season team of all-time for now, the 73-win Warriors, choke?

Which ever side you're on, it still should be considered one of the best postseason 7-game series in recent memory, all drama set aside.

This Celtics fan knows greatness when he sees it, not because SportsCenter tells me to.

Speaking of greatness, Craig Sager, who was my hero long before I realized it, reminded me what it is to appreciate what you love before it's too late. While he was given a time limit on this earth, he laughed and smiled instead of being scared and we all could be so lucky to live one day as Sages lived his 65-years on this planet.


"Don’t forget what happened to the man who suddenly got everything he wanted...He lived happily ever after.” - Willy Wonka & The Chocolate Factory

Great words that seem appropriate when it comes to remembering a legend such as Craig Sager.

I remember the Gene Wilder (who played Willy Wonka), many years ago singing his way into our hearts while reminding us that the littlest things in life mean the biggest if you simply use a little pure imagination:

"If you want to view paradise
Simply look around and view it
Anything you want to, do it
Want to change the world?
There's nothing to it..."

How can I forget that 2016 also silenced many musical artists that have contributed in one way or another to the soundtrack that has been my life so far. From Juan Gabriel, Prince, David Bowie to Phife Dawg (A Tribe Called Quest), re-living their voices and songs have been both refreshing and sad at the same time.

But the whole year wasn't all negative though:

The Chicago Cubs won the World Series after a over 100-year drought. The 100th edition of the Copa America soccer tournament was played on U.S. soil for the first time ever.

It was announced that humanitarian Harriet Tubman's face would be added to the $20-dollar bill by 2020. Plus, there was also evidence of a ninth planet in orbit, in outer space.

But let's be honest, other than the Cubs, the bad has really out weighed the good in the last 12 months.

I was able to see David Ortiz play in person one last time at Fenway Park just a couple of weeks before the Red Sox were knocked out of the first-round of the MLB playoffs.

Pretty sure 'Big Papi' was prepared to make one last run at another World Series ring before he officially retired while Tom Brady sat at home learning more about PSI than a middle-school science teacher.

Just last Friday I witnessed live at the TD Garden the emergence of a superstar in Isaiah Thomas as he dropped 52-points in the Celtics last win of the year. The debate is over folks, I.T. is the real deal.

But on a serious note, I lost my dear grandmother a few months ago, the last of my grandparents and now I am only left with pictures and memories of my childhood to try and keep a smile on my face while remembering those great moments.

Despite the bad moments, those that were there to lift you up can never be over or under appreciated. I'm not quite sure when my childhood truly ended, but it's safe to say 2016 reminded me to never forget it, no matter how many years go by.