Why the Celtics are only a slightly above average team 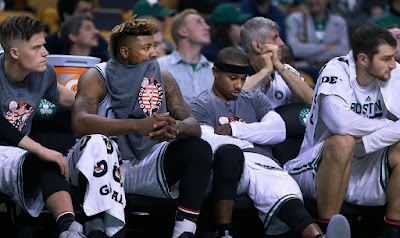 On Thursday night, the starters for the NBA All-Star game were announced and Isaiah Thomas just missed the cut apparently, losing a tie-breaker to the Raptors guard; DeMar DeRozan in the fan voting. If there was ever an indication that the Celtics are not as good as they were perceived to be, the last 48-plus hours should serve as a reminder.

Other than the All-Star snub, Boston is coming off a horrible 117-106 loss on Wednesday night to the free-falling New York Knicks, who have a 19-24 record.

After the game, the Celtics coach did not downplay his team's performance in any kind of way, going as far as pointing out what most fans are in denial about this season:


"I don't think we're as good as people have made us out to be," said Brad Stevens after the loss.

Despite the Celtics being 26-16 at the midway point of the season (technically 26-15 before their most recent loss), currently good enough for the third best record in the Eastern Conference, the C's have yet to beat an elite team.

A year ago, the Celtics were 22-19 at the halfway point and had wins over teams such as the Thunder, Rockets, Clippers and the Cavaliers.

This season's version of the Celtics have four more wins up to this point and only three victories over teams with better records than them, that include the Memphis Grizzlies (twice) and the Utah Jazz.

Granted the Jazz are considered a team with the league's best defense and the Grizzlies are a top-five seed out west (plus they own two wins over the Golden State Warriors), but the Celtics don't play the majority of their games in the Western Conference (thank God).

The Celtics are 19-9 against the East this season, 20-6 versus teams with a .500 or worst record and 0-8 against overall contenders (.650 winning percentage or better).

Boston missed out on a great opportunity to at least pull even with the Toronto Raptors for the second-best record in the East over a week ago after blowing a double-digit lead in the fourth quarter for the second time against their Atlantic Division rivals. Now the best one can hope for is a split in the season series when they face them two more times beginning next month.

The point of this rant?

The Celtics, despite all the hoopla that they're an Eastern Conference Finalist at best, will not even win their own division if they can't start to pull together some meaningful victories against quality teams.

A season ago, Boston was this gritty defensive juggernaut that grabbed the league's attention especially when they beat the Cavaliers, Thunder and Warriors, respectively, on their home floor. The C's were actually the only team last season to accomplish such a feat.

After 42 games this year, Boston currently ranks 17th in points allowed (105 PPG), sixth when it comes to defending from behind the arc (34% thanks to Marcus Smart and Avery Bradley), 12th in overall field-goal percentage (45%) and 28th in rebounding efficiency.

The Celtics' focus this season has clearly been their offense, other than Isaiah Thomas, who is averaging 28.7 points per game (second best in the NBA), the C's have improved only slightly on their shooting, especially from long range.

Let's also keep in mind that this year's Celtics, though ranked third in free throw percentage at 81.2 percent, only get to the line 21 times per game, good enough for 24th in the NBA.

It seems the Celtics have traded in their great defense for three-point shooting a la the Warriors, and though it looks pretty at times, they have yet to beat a quality team with their perimeter offense.

It's fair to say the Warriors are the measuring stick of the league right now. At 37-6, they have the best record in the association, we can all agree they are the team to beat.

So why are the Warriors scoring more points while attempting and making less 3's this season?

It's simple, they don't rely on one player to handle the bulk of their offense. Kevin Durant (26.3 PPG), Steph Curry (24.6 PPG) and Klay Thompson (21.1 PPG) all average 21 points or better and have led their team in scoring on multiple occasions, and I haven't even mentioned Draymond Green, who's capable of doing that on any given night as well.

I get it, the Celtics don't have the same talent the Warriors do, but to be taken serious in this league as a deep playoff contender, you can't depend on one player to carry you to the finish line night in and night out, such as been the case for Boston and Isaiah Thomas so far this season.

Don't get me wrong, watching Thomas turn into a superstar has been great (I was at the TD Garden when he went off for 52 points, it was surreal), but they barely beat the Heat, the second worst team in the East that night.

In fact the C's are 7-3 in their last ten outings, other than losses to the Cavaliers, Raptors and the Knicks, they beat the Heat, Sixers, Pelicans and Wizards for an average victory of five points or less while Thomas averaged 38 points throughout those wins.

In games where Thomas sat out, the Celtics are 1-3, and though they have battled injuries to everyone in their starting line-up at someone point or another (Bradley current injured with a strained Achilles, has missed five games already), Boston has to rely more on their depth, and that starts with Brad Stevens.

Losing to the Pelicans, Nuggets, Wizards and Pistons doesn't help the cause in the least bit.

On a side note: the Warriors only defeat to a sub .500 team this season came in a 117-97 loss to the Lakers back in early November.

It looks like they have gotten the monkey off their back after two huge wins against the Cavaliers and Rockets this week, whom they had each previously lost against, respectively, after blowing a double-digit lead in the fourth quarter. They finally have wins against two contending teams, something they couldn't say a week ago or all season for that matter.

If the Celtics want to beat the Warriors, Cavaliers, Raptors, or any other team with a .600 record or better record in the second half of the season, it's time to D-up, stop relying on Thomas and this 'live and die by the three' attitude that they simply don't have enough talent (pending any potential trades) to pull out more wins than losses.

It's time to stop being just above average in a weak conference.