Jimmy Butler beat out Isaiah Thomas for Player of the Week 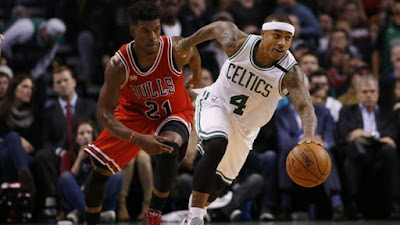 For the second consecutive time Isaiah Thomas has been nominated and has lost out on Eastern Conference Player of the Week honors.

The Celtics guard had another great week but apparently not as strong as Jimmy Butler, who despite trade rumors, led the Bulls to a 3-0 record while putting up averages of 38 points, 9.3 rebounds and 6.3 assists, while shooting 46.4 percent from the field and 40 percent on 3's.

Thomas, who also led Boston to a 3-0 week, averaged 30.3 points (ranked fifth in the league), 6 assists and 3.7 rebounds while shooting 51.8 percent from the field. He also led the NBA with 56.5 percent shooting from behind the arc among players who averaged 25 or more points last week.

Despite Butler grabbing more rebounds, both players are worthy recipients, but Thomas continues to put up great numbers as he's the only player in the east to be up for the award on back-to-back weeks this season.

Thomas won Player of the Week honors last month, but lost out on the Player of the Month award for December to Washington Wizards guard John Wall.