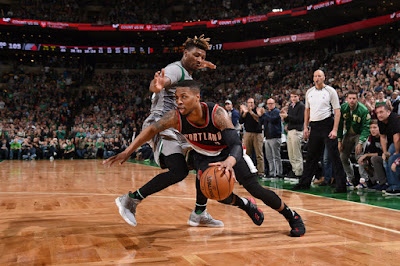 For a second straight game, the Celtics were without their best back court defender in Avery Bradley and his absence was felt against Portland's dynamic duo that led the Trail Blazers to an overtime win, giving the C's their second consecutive loss.

After Amir Johnson split a pair of free-throws that gave the Celtics a one-point lead (108-107), Smart committed a shooting foul on Lillard that turned the Celtics' lead into a one-point deficit with 1:16 left in regulation. With 14.9 second left, Isaiah Thomas missed a potential go-ahead bucket before Smart grabbed the rebound for a put back layup but in the process of doing so committed a foul on Lillard.

Lillard made another pair of free-throws that gave his team a three-point lead. Out of a timeout, Celtics coach Brad Stevens designed a play for backup guard Terry Rozier to make a 3-pointer that ultimately sent the game into overtime.

In the extra period, Lillard continued to pour it on and completed a critical three-point play with 47 left to give Portland a 122-118 lead. From there the Celtics never recovered as they traded baskets with the Trail Blazers until time expired.

Meyers Leonard scored 17 points off the bench for the Trail Blazers. Old friend Evan Turner got the start at small forward and scored all 12 of his points in the second half to go with four rebounds and four assists. Al-Farouq Aminu finished with 11 points and 7 rebounds and Mason Plumlee finished with a double-double (10 points, 11 rebounds).

Portland, losers of five of their last seven games, entered the Garden hungry for a win after losing to the lowly 76ers in Philly on Friday -- the first night a back-to-back.


"I told the guys in there, I mean whatever their record is, 19-27, we all know they're not a 19-27 team," Stevens said after the game. "This is a team that was a fourth or fifth seed in the playoffs last year. They're starting to obviously work some other guys in but they're healthy and they played well today."

McCollum put on a shooting clinic by scoring a whopping 26 points in the first half and kept his team afloat as the Celtics led 65-56 at halftime. The Trail Blazers responded by outscoring the Celtics 32-21 in the third quarter -- when Lillard found his offensive momentum and went on to score 19 second-half points and killed the Celtics' chances of pulling out a win in overtime.


"I thought we were really locked into those guards and I thought we tried to make it as tough as possible," Stevens said about Portland's back court. "Those guys are really good players, obviously, but I thought we did a lot of good things in that regard. You know as I told our guys just now, we won a lot of games over the last month that were toss-ups, and we didn't play as well as we did today in a lot of ways. That said, we still have a lot of errors that we have to overcome."

The Celtics will hit the road for their Tuesday night game against the Magic in Orlando before coming home to host James Harden and the Rockets at TD Garden on the second night of a back-to-back.

The Celtics finished with a uncharacteristic 21 turnovers against the Trail Blazers while their opponent finished the game with 14. The C's are currently fifth in the league in fewest turnovers per game -- averaging 12.6. The majority of those turnovers came in the fourth quarter (12) where Portland nearly won the game before the end of regulation.