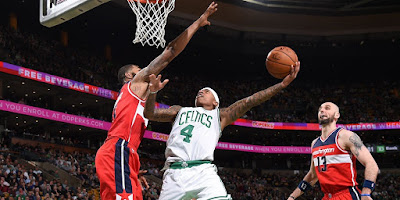 Isaiah Thomas continues to treat the TD Garden fans with unstoppable fourth quarter performances and on Wednesday night he didn't disappoint as he scored 20 points in a Celtics 117-108 comeback win over the Washington Wizards.

Thomas finished the night with 38 points (14-of-29 from the field), 6 rebounds and 5 assists to lead the Celtics to their six straight home win.

Jae Crowder, who got into John Wall face's after the final buzzer as the two squared off near the Wizards bench, scored 20 points (4-of-6 from behind the arc) and grabbed 5 rebounds on the night.

Wall appeared to take a swipe at Crowder's face, then the players had to be separated immediately as words continued to be exchanged from other Celtic teammates including Marcus Smart (9 points, 4 rebounds and 4 assists) and Terry Rozier, who both frustrated the Wizards throughout the night with their physical defense.


"It's a physical team. We're physical. Neither of us has to be pumped," said Bradley Beal. "It's was just a physical game. That's all it was."

Al Horford added 16 points and 9 rebounds, while Rozier chipped in 11 points and 4 rebounds off the Celtics bench.

Bradley Beal led the Wizards with 35 points, while Otto Porter added 20 points, 6 rebounds and 5 assists. Markieff Morris chipped in 14 points, 9 rebounds and John Wall struggled from the floor shooting 4-of-21 for a season-low 9 points to go with his 10 assists as Washington got their three-game winning streak snapped and are now 19-19.

Both teams were playing on a second night of a back-to-back and got chippy and physical through most of the game, especially in the third quarter when Smart and Beal got tangled up under the Wizards' basket. Both players fell to the floor and had to be separated by officials and teammates as the two stood up exchanging aggressive dialog to one another. Beal received a technical foul while Smart was called for a regular foul.

The Wizards at that point were ahead 79-69 after an 11-3 run before Boston pulled within two (85-83) by the end of the quarter. Thomas converted a four-point play to start the final frame and the Celtics regained their lead.

The Celtics used a 13-0 run to finally put away the Wizards as Rozier capped off the surge with a 3-pointer to go ahead 108-99 and Boston never gave up the lead again with 3:24 remaining. Former boxing champion Floyd Mayweather Jr. sat court-side cheering on his good friend; Thomas while he put on another stellar performance in front of the home crowd.

Boston (24-15) avenged a loss to the Wizards from November to even up the season series, 1-1 and it should be interesting when these two teams meet again in two weeks down in D.C.

In the meantime, the Celtics will travel to Atlanta to face the Hawks on Friday night. It will be the first meeting between the two teams since last year's first-round postseason matchup where Boston was eliminated 4-2. It will also be Horford's first trip to Phillips Arena as a visiting player since he signed with the Celtics as a free agent last July.

Avery Bradley missed his third straight game with a strained right achilles, it is still unknown if he will be available on Friday night in Atlanta. Jordan Mickey made his first start of the season with his parents in attendance for Amir Johnson (injured ankle in the first quarter of the loss to the Raptors on Tuesday). The second year forward finished with 4 points, 2 rebounds, an assist and a block in 14 minutes of action. Jaylen Brown was also out on Wednesday night resting an ankle injury sustained in practice on Monday, his status is day-to-day.