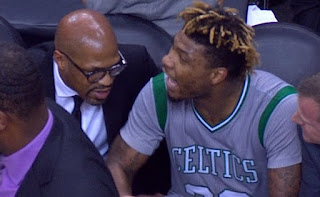 Celtics guard Marcus Smart got into a heated exchange with his assistant coaches on during the last timeout in the fourth quarter of Tuesday night's 123-108 loss to the Wizards.

Smart, who was seen on television getting into it with assistants Jerome Allen and Jamie Young, was very animated throughout the shouting match between him and his coaches. In one video, Celtics guard Terry Rozier is seen restraining coach Allen while arguing with Smart.


"So he just wanted to go back in. And he had played 12 [consecutive] minutes or whatever, so he wasn't going to go back in," Stevens said.

When Stevens was asked why Smart was so upset, Stevens responded, "He wanted to go back in badly."

Before being subbed out, Smart had played 17 of the first 20 minutes of the second half. He addressed the incident after the game.


"Just coaches and players, they're real passionate about the game and hate losing and having different opinions about certain things in the game," Smart said. "Of course, I wanted to go back in. Just like everybody else to play it out and give it everything they had and leave it on the court. We had different opinions on that."

Smart finished with 13 points on 4-of-13 shots, five rebounds and four steals on Wednesday. The Celtics are in the midst of a three-game losing streak. Throughout the three-game skid, Smart is averaging 11.3 points while shooting just over 29 percent from the floor.

Celtics don't have much time to dwell on their shortcomings as James Harden and the Rockets head to TD Garden for a Wednesday night matchup.

Smart tweeted out an apology about the incident on Twitter late last night: