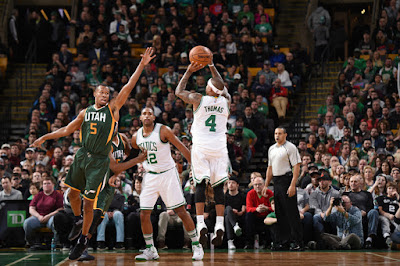 After scoring 52 points last Friday, Isaiah Thomas set a new career milestone on Tuesday -- dishing a career-high 15 assists while the Celtics tied a franchise 3-point shooting record en route to a 115-104 victory over the Jazz.

Utah pulled to within seven points inside the five-minute mark through the fourth quarter (103-96) before Avery Bradley drained a 3-pointer -- the Celtics' 16th of the night -- giving Boston their first double-digit lead since the end of the third quarter.

When Al Horford committed his sixth and last foul, Thomas reentered the game and was whistled for a foul that resulted in a pair of free-throws drained in by Joe Ingles -- making it a 10-point game (108-98) with 3:23 left. But on the next possession, Bradley nailed another 3-pointer that gave the Celtics a 13-point lead with 3:06 left.

From there, the Celtics were able to hold as they impressively prevented the Jazz from making one final run.

The Celtics found their offense early and often throughout the first half, shooting 52.5 percent in the second half as they took a 54-45 lead into the break. The C's were also hot from behind the arc -- where they made 7-of-14 attempts before closing out the half on a 10-2 run.

Hayward, Utah's leading scorer, was the biggest reason the Jazz hung around after halftime. He scored 19 points through three quarters before the Celtics took an 85-74 lead into the final frame.

The Celtics will look to make it three wins in a row on Friday when they host the 76ers at TD Garden.


Isaiah Thomas is only the fourth Celtic in 30 years to have a 25-plus points and 15-plus assists in one game. Only Larry Bird (3), Rajon Rondo (2) and Sherman Douglas (1) have reached such a feat in recent Celtics history.