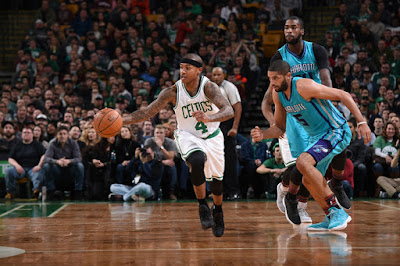 Isaiah Thomas isn't showing any signs of slowing down as his fourth-quarter dominance continued against the Hornets in a 108-98 win at TD Garden.

Thomas poured in 17 of his 35 points in the final period and led the Celtics to their third straight win, 11 of their last 13 games.

Al Horford added 22 points, 6 rebounds and Jae Crowder finished with 15 points, including 3-of-8 from deep.

Kemba Walker's scored a team-high 24 points and Marvin Williams finished with 21 points for the Hornets.

Walker's 13-point first quarter set the tone early for what would become a point guard's duel between him and Thomas. After what was somewhat of a slow start for Boston's point guard, Thomas knocked in back-to-back 3-pointers in final minutes of the second quarter to give him 13 points while Walker finished with 18 points at halftime.

Thomas continued heating up in second half, scoring five points in the first five minutes but the Celtics struggled in trying to build a significant lead. The Hornets got back within two midway through the quarter but that was the closest they came to tying the game as the C's stretched their lead out to nine (80-71) at the start of the final frame.

Thomas only needed the opening minutes to score seven points as the C's jumped out to a 13-point advantage -- their biggest lead of the night. However, Charlotte pulled to within five (88-83) before Isaiah Thomas scored eight consecutive points, including back-to-back 3-pointers -- which pushed the Celtics' lead back up to double figures (96-85).

After the Hornets pulled to within seven points, it was the Celtics' All-Star point guard who put them away for good. Thomas followed up a fade-away jumper over Cody Zeller with a an isolation play against Walker, who smiled about the matchup before Thomas blew past him and drained a shot by the free-throw line with 33.2 seconds left (104-96).

The Celtics (26-15) will look to take advantage of their three-game homestand that continues against the Knicks on Wednesday and ends on Saturday night against the Trail Blazers.

Isaiah Thomas stretched his streak of scoring 18-plus points to a league-leading 35 games. He's now averaging 10.1 points in the fourth quarter -- which also leads the NBA.