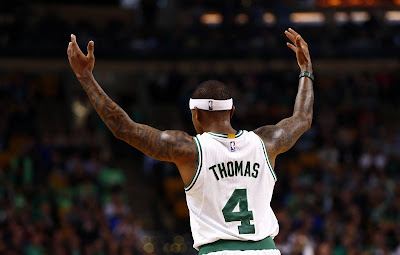 Celtics point guard Isaiah Thomas was named to the Eastern Conference All-Star team when the NBA All-Star reserves were announced on Thursday.

For Thomas, it will be his second consecutive selection and certainly a deserving one considering the career-defining season he's having. After his recent 38-point performance against the Rockets, Thomas currently ranks second in the NBA in scoring, averaging 29.1 points per game.

He became only the fifth Celtic to break the 50-point barrier when he scored 52 points against the Heat on Dec. 30, placing him alongside legends such as Larry Bird, Kevin McHale, Sam Jones and Paul Pierce. Thomas also has a shot of averaging the most points per game in a month in franchise history -- he's currently averaging 32.9 points in January, putting him right behind the leader -- Pierce -- who averaged 33.5 points in February of 2006.

Thomas posted a series of tweets on Twitter late last night, thanking his coaches and fans.

It's an honor to again represent the Boston Celtics, The greatest franchise in the NBA in this years ALL STAR weekend!
— Isaiah Thomas (@Isaiah_Thomas) January 27, 2017

While this is supposedly an individual honor, it really is a team award, recognizing our success as a team! #CsUP #YouKnowWhatTimeItIs ⌚️
— Isaiah Thomas (@Isaiah_Thomas) January 27, 2017

I hope this is just another step in achieving the ultimate team goal and that is to bring another championship to Boston.
— Isaiah Thomas (@Isaiah_Thomas) January 27, 2017

The 2017 All-Star Game will be played in New Orleans on February 19.