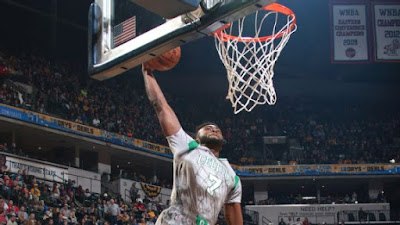 The NBA has invited Celtics rookie Jaylen Brown to next month's Slam Dunk Contest at All-Star Weekend but he hasn't decided if he wants to participate.

After receiving plenty of encouragement from his teammates last month about entering the contest, Brown's only concern is his health -- something he worries may be at risk if he were to enter the high-flying challenge.


"I'm not really worried about anybody (else who might be in the contest) or anything," Brown explained. "I think I have a lot to offer. It's just with your rookie year, your body and everything, it's just a lot. It may seem foolish, all those dunks and stuff, they look cool but it takes a toll on your body for sure. And I want to put myself in the best position to help this team. The dunk contest -- it may or may not take from it, but I don't think it's good or bad. It's just something you've got to decide about."

Brown may be over thinking this one but you can't criticize him for his cautiousness. A dunk contest may not have the same lasting effects on an athlete's body in comparison to what a Home Run Derby does to MLB sluggers but kudos to the former So. Cal Traveler for thinking ahead.

Teammate and former dunk champion Gerald Green has certainly expressed his support in wanting to see Brown participate in All-Star Saturday night's headlining event. The Celtics rookie admitted that Green has already helped him in coming up with ideas for the contest.


"A lot of it's just mental creativity," Brown said. "G-Green has been coaching me up a lot and things like that, giving me a lot of good ideas I wouldn't have thought of on my own."

Still undecided, Brown hopes he'll be able to make a decision by the end of this weekend.


"It's creeping up fast, faster than I thought it was," Brown said. "It's almost All-Star weekend. I think we're, what, two or three weeks away so it's come up a lot faster than I thought. I haven't even had time to think about if I wanted to do it or not. I've been focusing on the season and everything that's going on in front of me now. So I think this weekend I'll figure it out officially if I'm going to do it or not. I'll make the decision."