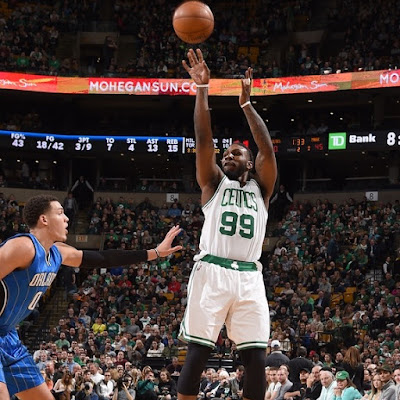 For only the second time this season, 'Gino' -- a celebratory video montage at TD Garden that only plays in lopsided game where the Celtics are ahead -- made an appearance on Friday night towards the end of a 128-98 blowout win over the Magic.

Behind a fluid offensive attack, the Celtics dominated their opponent throughout the night. They jumped out to a 39-24 lead at the end of the first quarter and stayed ahead of the Magic every step of the way.

Isaiah Thomas' 21 points led six Celtics in double figures, but rookie Jaylen Brown wasn't too far behind -- he scored a season-high 20 points to go with his 8 rebounds and five assists. Jae Crowder finished with 19 points, he was on fire from deep, knocking down 5-of-7 from behind the arc. Kelly Olynyk (16 points, 5 rebounds) was productive off the bench while Tyler Zeller and Amir Johnson each added 10 points.

The Celtics bench combined for 51 points. Olynyk led the way in scoring but it was Marcus Smart's playing making that led to easy baskets for his teammates off the bench. Smart dished 11 assists to go with his 8 points. He was a game-high plus-36 and very efficient throughout the game.

Thomas, who extended his streak of scoring 20 or more points to 30 consecutive games, says it was refreshing to put together such a dominant performance on the first night of a back-to-back.


"It was great, all we really care about is a win," Thomas said. "But it was great to get our first blowout of the year and be able to rest in the fourth quarter. The whole team played a great game tonight."

Celtics coach Brad Stevens was forced to tweak his starting lineup for the second straight game after Al Horford -- who suffered a mild strained groin injury -- was a late-game scratch. Stevens stuck with the same backcourt we saw against the Rockets of Thomas and Brown and Jerebko got a second straight start in the frontcourt alongside Crowder and Amir Johnson.

Horford will travel with the team to Milwaukee for Saturday night's game against the Bucks but there's still no word if he'll be ready to play come game time.