Celtics finally have their sixth-man in Marcus Smart 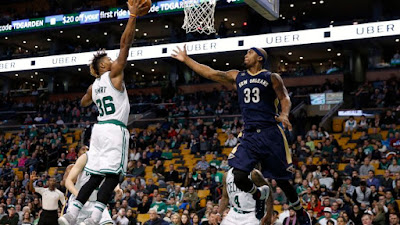 On a snowy night in Boston this past Saturday, the Celtics faithful made it out to the TD Garden to watch their home team beat the New Orleans Pelicans, but what they didn't expect to witness was another great performance from third-year guard Marcus Smart.

Smart, who started in place of a resting Avery Bradley (Achilles), took full advantage of his opportunity as he ended his night with a season-high 22 points (5-of-7 from 3), 6 assists, 5 rebounds, two steals and a block in 32 minutes of action (mostly in three-quarters) against the Pelicans. It was the Celtics' fourth straight win, and fifth consecutive victory at home (11-6).

If you haven't been paying attention to this season's Celtics, they have been slowly turning heads all over the NBA and national media with their recent play. With a 23-14 record, the C's have now won eight of their last 10 outings and sit one game behind the Raptors for the second-best record in the Eastern Conference.

There has been many debates that you can choose from when it comes to the Celtics, but so far in 2017 (I know, it's been a busy week), I have heard such arguments including; Isaiah Thomas being a legit superstar, Jae Crowder and his assessment on Twitter about certain fans, and now Smart's role as a sixth man.

It's no secret that the hole left by the departing Evan Turner has been noticeable in some games versus others in the first quarter of the season. But it's also obvious who should have been the one to step into that void once the swingman took his money and ran to Portland, none other than Smart.

Smart started the season on the disabled list with an ankle injury, and was behind the eight-ball once again as he slowly worked his way back into game-shape, showing moments of brilliance in one game while demonstrating bone-headed plays in the next (not to mention his league leading flops).

His injury forced him to miss only three games and he returned in time to replace Jae Crowder (ankle) in the starting lineup, then Isaiah Thomas (groin) and most recently, Avery Bradley. Smart has become more reliable especially when he has been called upon to play starter minutes at three different positions this season.


“I know what he does to help you win. He cannot score a point, he can miss eight shots and not make any, and he can still have a positive impact on winning,” Celtics coach Brad Stevens said of Smart on Saturday night. [Boston Globe]

In games against the Celtics, Smart is holding players he has been assigned to guard (such as LeBron James, Anthony Davis, Mike Conley, etc) to nearly 4 percent below their season field-goal percentage, according to NBA's player tracking data. In the last 10 Celtics games, his opponents are only shooting 34.3 percent from the field (9.1 percent below their season average).


"Smart is a special player, he's special because he has the things you can't teach, " said Isaiah Thomas of Smart. "When he has the full package, he's a tough guard to handle. When he plays like that, I bet we win 100 percent of the time, because he puts so much pressure on the [opposing defense] when he's making his shots and then, on the defensive end, he's a monster." [ESPN Boston]

Though Smart is only shooting 37.3 percent from the field (a career-best) this season and 31.2 percent from behind the arc, the point guard is hitting 48.3 percent of his 3's in Boston's last eight games.

No one can deny Smart's defense but it's the other end of the floor that has put opposing teams on notice. On offense, Smart has been taking advantage of the pick-and-roll when it comes to becoming a better facilitator while also limiting his shot selection to catch-and-shoot more (especially from the corner) versus pulling up to pop a 3 in transition.


"Offensively, certainly, I believe in him shooting the right shots and making them, and it's been good that he's found a niche in the post against smaller guys and then also has found good spots to take and make those 3's," said Stevens. [ESPN Boston]

So in closing, ladies and gentleman of the jury, Smart is not only the Celtics' official sixth man but a legitimate back-up point guard as well.

The Celtics are undefeated in 2017 (3-0), and on Tuesday face the task of playing the Atlantic Division leading Raptors, who are 24-13 and have lost two straight.

According to ESPN, Boston will be without Avery Bradley for a second straight game when the Celtics travel up north but guess who will be starting in his place again?

If you don't agree with me on whether Marcus Smart is for real, watch him contain All-Stars Kyle Lowery or DeMar DeRozan to prove his case.

Either way, what better team to face the Celtics, who have been looking to prove their superiority, and avenge a loss to than the Raptors.