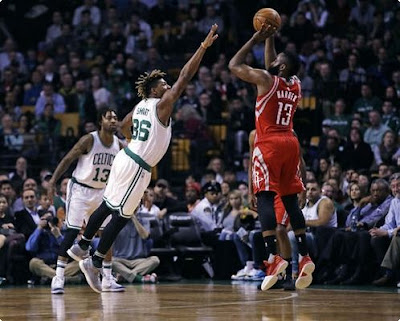 In their most impressive win of the season, the Celtics outscored one of the best offenses in the league while containing Houston's leading scorer in a 120-109 victory over the Rockets.

The Celtics snapped a three-game losing streak on Wednesday night at TD Garden. Isaiah Thomas scored a game-high 38 points, Al Horford flirted with a double-double (23 points, 9 assists) and Jae Crowder (23 points, 10 rebounds) had a productive night but what stood out the most about the Celtics' much-needed win was their defense.

Harden, who entered last night's game as the league's second leading scorer, went cold in the third quarter (1-of-5) after Crowder -- the team's defensive anchor -- cranked up his intensity and rattled the MVP candidate. Although Harden finished with a team-high 30 points, it took him 18 attempts to get there as he finished the night shooting 33.3 percent from the floor and committed seven of the team's 17 turnovers.

More than half of Harden's points came from the free-throw line -- where he drained 16-of-19 attempts.

Throughout the Celtics' three-game losing streak, the defense in the back court had been a turnstile for opposing guards like Bradley Beal, John Wall, C.J. McCollum, Damian Lillard and Derrick Rose. All five guards finished with at least 28 points or more against the C's while shooting over 50 percent from the floor. With Avery Bradley still out of the lineup, the stars were aligned for Harden to have a monster shooting night but that certainly wasn't the case.

Celtics rookie Jaylen Brown, who got the start over Marcus Smart in the backcourt, kept up with Harden in the first quarter before Smart and Crowder took turns pestering the veteran and forcing him to commit turnovers throughout the second half. For the first time in a while, the Celtics were a cohesive unit on the defensive end of the floor. It started with Crowder but was sustained with help from guys like Smart, Horford -- who finished with a game-high plus-21 rating -- and Jonas Jerebko in the frontcourt.

Jerebko, along with Brown, was another addition in the starting lineup against the Rockets in place of Amir Johnson and didn't disappoint, especially on the defense end of the floor. He finished with 7 rebounds and made the most of his 23 minutes of playing time by clogging the lanes and providing plenty of help-defense in the post.

Jerebko stepped up when his name was called and even has a battle scar to prove it, one right above his lip -- where he needed four stitches to close his wound after receiving a blow to the face from Harden while trying to prevent the Rockets guard from making a layup. Harden was hit with a Flagrant-1 foul and that's when the Celtics' offense went on a game-clinching 15-4 run, giving them an 11-point lead with under two minutes to go.

Much like we saw last season, the Celtics' defensive stops triggered their offense -- which erupted for 120 points -- and led to 64 points in the paint. The C's also out-rebounded their opponent, 48-30.

Before Wednesday's game the Celtics' defense had been a disappointment, to say the least. For a team that finished fourth in defensive efficiency last year, the Celtics now find themselves in the bottom half of that same statistical category and have allowed an average of 119.7 points in their last three outings.

Nonetheless, the Celtics (27-18) find themselves only half a game behind the Raptors -- who they'll face at TD Garden next Wednesday -- in the east and 3.5 games behind the Cavaliers. The Raptors are in the midst of a five-game losing streak, while the Cavaliers dropped their third straight on Wednesday night against the Kings.

If the C's want to cash in on a golden opportunity of catching up to the division-leading Raptors for second place in the Eastern Conference before their matchup against Toronto next Wednesday, they'll need to continue to play with the same level of focus we saw against the Rockets and start making it a habit.