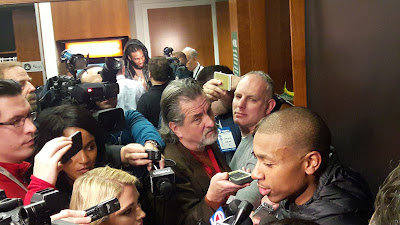 While the majority of the Celtics media were talking to Isaiah Thomas about his double-double (29 points, 15 assists) performance and the team's hot streak of late, Jae Crowder was having a different conversation at the other end of the room.

Crowder, who shot lights out in Tuesday's win over the Jazz, vented his frustration over Celtics fans in attendance cheering for Gordon Hayward when his name was announced during Utah's player introductions.

Hayward, an upcoming free agent who the Celtics could potentially have their eyes on this summer, got a warm welcome from the faithful fans at TD Garden. Crowder didn't appreciate the crowd's praise for the opposing small forward -- stating that he personally felt disrespected by it.


"I heard the cheering [for Hayward] before the game," Crowder said after the game. "I didn't like that at all. I think that was a sign of disrespect to me from the fans. That sparked a little fire in me."

That flame continued to burn in Crowder after he left the garden as he proceeded to voice his frustration on Twitter -- ranting about Celtics fans' 'disrespect' and went as far as saying he wouldn't mind playing for another team.

Crowder then continued his rant by responding to tweets from Celtics fans. 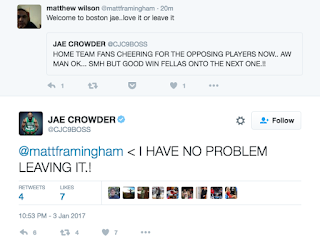 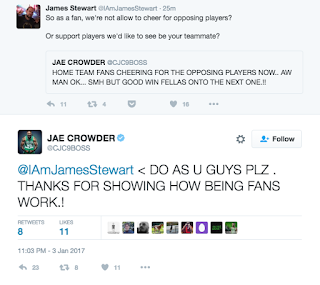 The most surprising tweet came from a fan in Dallas, who proposed the idea of Crowder returning to the Mavericks -- the team that traded Crowder to Boston as part of the Rajon Rondo deal -- a tweet that Crowder re-tweeted on his page.

Celtics coach Brad Stevens weighed in on Crowder's comments with Zolak & Bertrand on 98.5 the Sports Hub.


"I was somewhat surprised to read what he said and tweeted," Stevens said. "I told him that this morning because, every day that he comes in, you can tell he's thankful to be a Celtic and every time we have that talk about how you represent Boston as an athlete and how tough you have to be to be well-liked here, I always thought Jae represented the best of that."

Stevens shared more about their conversation and how Crowder responded to his coach.


"The first thing he said was, obviously, he wished he didn't express himself like that," Stevens said. "But we talk all the time about embracing the expectations of being an athlete here in Boston because I do think this city is such a tremendous sports town and offers our guys such an opportunity to grow and feel those banners above us, feel the expectations of being a team-first player then playing as hard as you can.

"A lot of our guys have embraced that. I don't know that anybody has embraced it as much as Jae over the last few years."

Crowder finished with 21 points on 6-of-8 shots, including 5-of-6 from behind the arc in Tuesday's win -- his strongest offensive performance of the season.

After missing eight games with an ankle injury, the Celtics' starting small forward has been one of the team's most efficient scorers -- he shot 47.3 percent from the floor throughout the month of December while averaging 13 points and five rebounds.

Hours before the game, Sevens mentioned the fact that Crowder has been a diligent shooter throughout the season and that he's making a valiant effort in making sure Crowder gets plenty of open looks in his offense.

Fueled by Celtics fans cheering for an opposing player, Crowder stepped up to the task. While Hayward, Utah's leading scorer, finished with 23 points but scored 19 of them in the first three quarters before Crowder and the Celtics finalized a 115-104 win.