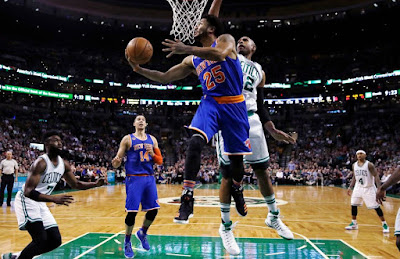 For a Celtics team that has been winning games behind excellent shooting, you knew there was going to be a game when Boston's offense was going to struggle.

Wednesday night at TD Garden was that night and due to poor Celtics defense and a vintage MVP-like performance by Knicks guard Derrick Rose, New York was able to cruise to a 117-106 victory over the Celtics.

Rose's double-double (30 points, 10 rebounds), along with his five rebounds and two steals, led the way for New York. He effortlessly attacked the paint and knocked down jumpers from everywhere inside the 3-point arc -- where he shot 54.2 percent on 13-of-24 shots.

The Knicks entered the Garden with a 2-11 record since their Christmas Day matchup against the Celtics at New York but managed to put together an upset. With no Kristaps Porzingis, Joakim Noah and a poor shooting night from their All-Star forward Carmelo Anthony, the Knicks capitalized on cleaning the glass and bench production.

New York was a plus-24 in rebounding (57-39), including 18 offensive rebounds -- which the Knicks converted into 24 second-chance points. Led by rookie Willy Hernangomez' double-double (17 points, 11 rebounds), New York's reserves combined for 55 points.

Mindaugas Kuzminiskas' 17 points led the Knicks front court while Anthony finished with 13 points on 5-of-14 shots and Justin Holiday added 15 points, 5 rebounds and was a game-high plus-23 off the bench. Brandon Jennings (11 points) also finished in double figures as one of six players to score in double-digits.

Isaiah Thomas, who only needed three quarters to score 31 points, finished with a game-high 39 points. Jae Crowder scored 21 and Al Horford flirted with a double-double (10 assists, 7 rebounds) but couldn't find his scoring touch as he finished with five points on 2-of-14 attempts. And Jaylen Brown (12 points, four rebounds) was the brightest spark off the bench.

Facing a 63-54 halftime deficit, the Celtics never regained their second-quarter lead once throughout the second half. In the beginning of the fourth quarter, Brown completed a 3-point play to pull his team to within four points (91-87) and continued to attack the rim. The Celtics did a terrific job of slowing the game down and getting to the free-throw line -- where Brown finished 6-of-7.

With 7:57 left, Brown drained in a pair from the charity stripe to pull the Celtics to within one point (97-96) before the Knicks went on a game-deciding, 17-4 run -- putting New York up by 14 (114-100), their biggest lead of the night -- with just 2:25 left. Throughout the run, Rose poured in eight of his 30 points while the Celtics came up short in trying to convert layups and contested jumpers.

Celtics (26-16) will look to close out their three-game homestand on a positive note on Saturday when they host the Trail Blazers at TD Garden.

The Knicks shot 50.5 percent from the floor, including 48 points in the paint and a handful of uncontested jump shots from the mid-range. Although the Celtics outperformed their opponent with 52 points in the paint and 27-of-29 from the charity stripe (Knicks: 15-of-18), New York exposed the hole in the Celtics' defense, which led to the humongous 17-4 fourth-quarter run that earned the Knicks only their second win in seven games.