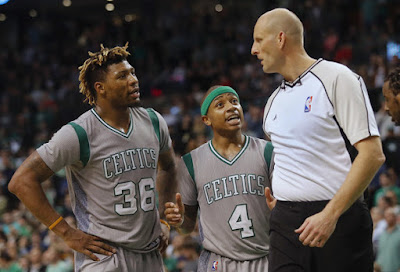 With 10 seconds left in regulation in the Celtics' Saturday night overtime loss against the Trail Blazers, Marcus Smart was whistled for what was considered the most critical personal foul of the game.

Blazers guard Damian Lillard lost the ball to Smart on the baseline before Smart converted a layup that would have given the Celtics a one-point lead.

Instead, the officials waved the basket and called a personal foul on Smart -- which resulted in Lillard making both free-throws and stretched Portland's lead to three (113-110).

The game's Last Two Minute Report that was released on Monday confirmed what Smart adamantly believed was the wrong call.

"I definitely felt like I had it clean," Smart said after Saturday's game. "I think it was clean and the indication of that is the whistle didn't blow until I was bringing the ball down in our own basket, so.

Although Terry Rozier's 3-pointer managed to send the game into overtime -- where the Celtics ultimately fell short to the Trail Blazers -- it doesn't negate the fact that this mistake by the NBA officials may have cost the C's a win.

Since the league has implemented the Last Two Minute Report, it obviously doesn't change the outcome of the game nor do they discipline the official who made the incorrect call. Instead, the officials get away with a "you were right" kind of an apology and everyone moves on.

Maybe this report will help Smart's case in future 50/50 calls. He doesn't have the best reputation throughout the league -- as a guy who has been disciplined for attempting to bait referees into calling a foul via embellishing, flopping -- but this time he was right.

Video of the play follows below:

Photo used is courtesy of the Associated Press