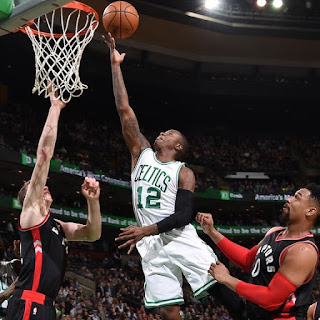 The unsung heroes set the stage. And then Isaiah Thomas, as he seems to do on a nightly basis, danced on it.

Trailing by 18 points in a showdown with the Raptors for the second seed in the Eastern Conference, the Celtics closed the game on a monster 52.-29 run behind 44 points from their All-Star point guard to complete a 109-104 victory.

Thomas put together another incredible fourth quarter, scoring 19 of his 44 points, but the Celtics reserves set the stage for his heroics. Led by Marcus Smart (10 points, 5 assists, 5 rebounds), the benched helped chip away at a double-digit deficit and carried their momentum into the fourth quarter.

Throughout the third quarter, Smart applied pressure on Raptors guard Kyle Lowry and finished strong on the offensive end by making cuts to the basket for easy layups. He was also finding his teammates for easy assists but was most effective in disrupting the flow of Toronto's offense.

Terry Rozier, who finished with 5 points and 7 rebounds nailed a 3-pointer at the end of the third quarter to pull the Celtics to within eight. He also pulled down two offensive rebounds in the second half to keep possessions alive and slowed down the Raptors' reserve guards on the defensive end. Tyler Zeller, who finished with five rebounds and four points, made a reverse dunk and tossed an alley-oop to rookie Jaylen Brown to trim the deficit down to five (91-86).

However, Lowry, who led the Raptors with 32 points, helped his team regain the lead by draining five straight points for Toronto. With 48 ticks left, Thomas knocked in a 3-pointer to give the C's a two-point lead before Patrick Patterson missed a 3-pointer and the Raptors were forced to intentionally foul the Celtics in the final seconds.

Throughout the first half, the Raptors looked unstoppable. Behind superior defense and efficient offense, Toronto had its way with the Celtics despite Thomas' offensive surge. The Raptors were a tough matchup for the Celtics in a halfcourt set -- where the Celtics struggled to defend the pick-and-roll. Whether it was an easy layup down low or an uncontested mid-range jumper, the Raptors made them pay.

That was until the second half, when the C's turned up their defensive intensity and made an effort on the glass -- where they pulled down 12 offensive rebounds and finished with 11 second-chance points. Without a secondary go-to scorer, the Celtics are going to need guys like Smart, Rozier and Brown to make plays in the second half, especially against top-tier teams like the Raptors. Thomas has the support he needed just in time to catch fire in another dominating fourth quarter.

With the win, the Celtics (30-18) remain in second place and will look to stretch their winning streak to six games when they take on the Lakers at home on Friday.

The Raptors shot 52.6 percent from the floor but were outscored 32-19 in the final frame. The Celtics forced Toronto to commit 15 turnovers, including six steals while Boston's offense only committed nine turnovers.