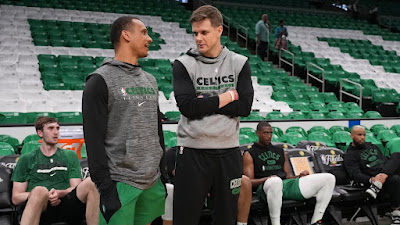 The Utah Jazz are reportedly hiring Celtics assistant Will Hardy as their new head coach, according to ESPN's Adrian Wojnarowski.
Per Shams Charania of The Athletic, Hardy became a top-choice at the beginning of the month for the vacant coaching job, as Jazz CEO Danny Ainge and his front office conducted their search among NBA assistants, G League coaches and former players.
Hardy's deal with the Jazz will be for five seasons and he'll become the youngest coach in the league at 34-years old after being hired as a video coordinator by the San Antonio Spurs in 2010, before being named as an assistant on Gregg Popovich's coaching staff in 2016 and then joining Ime Udoka as his top assistant in Boston this past season.
Under Udoka, Hardy helped lead the Celtics to their first NBA Finals appearance in 12-years by playing top-notch defense that ranked first in the league.

Couldn’t be happier for my guy! Extremely deserving https://t.co/CQPEGFtPDg