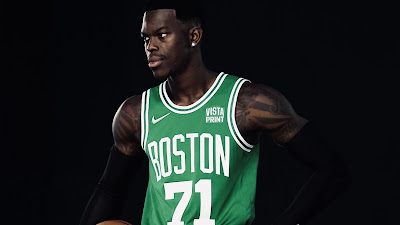 New Celtics guard Dennis Schröder was more than happy to explain the story behind him reportedly rejecting a more than lucrative contract extension from the Los Angeles Lakers last season.
The deal was for a reported $84 million before the offseason came and went without the veteran guard hearing from one team other than Brad Stevens and the C's, who essentially could only offer Schroder a one-year, $5.9 million of the taxpayer mid-level exception.
According to the combo guard, there was more to it than what went viral as Schröder spoke to reporters on Monday.

"At the end of the day, I feel like for me, personally, I got to be comfortable in the environment I'm in. I love the Lakers organization and they did great things, but I think for me, and this is just business, I don't think I fit in 100 percent. You play with LeBron and AD, that's two of the best players in the NBA, and I don't think I gave them everything that I bring to the table."

Schröder seemingly has not been affected by all the jokes being made at his expense, stating he's good finically despite many believing he "fumbled the bag." The Celtics guard even went as far as poking fun at himself on his birthday, giving fans free range to insert a punchline in response to an Instagram post where it appears he's upset while there are very expensive cars and bags all around him.

"For me and my family, I signed a pretty good contract after my fourth year, and my family and myself, we're going to be good," he said. "I'm 28 years old, and I’m still playing in the NBA for a long time.

"Money is not everything at all times. I want to be comfortable in a situation where I know people appreciate me. At the end of the day, that's it. And that all this stuff happened how it happened, you just got to look forward and just try to keep improving, and try to show people what you’re capable of, and then everything will come back."

Still, the Celtics were excited once they saw there was chance to sign Schröder, especially former Atlanta Hawks teammate and elder statesmen Al Horford, who played with the guard from 2013-16

"I honestly didn't think we had a shot at getting him or anything like that, but that was the one that I was like, 'man,'" said Horford during his Media Day presser. "He has such an edge to him.

"I just know that being in this position he is in now, he's going to be great. When I saw that was a possibility, I was really hoping for it. I called Brad, I was like 'Do we have a shot?’ He was like, 'I don't know, maybe.' When things worked out, I was really happy."

Stevens, Horford, Jaylen Brown, Jayson Tatum and Ime Udoka were all involved in the recruitment process of  Schröder, as they each reached out, convincing the veteran that the Celtics were more than interested in signing him.

"I think Boston was just the right fit and the right mentality, how the organization works, the system, it's a winning mentality that was just for me the right move to make," Schröder said. "I hope that this is going to be for a long time.

"But like I said, this is new to me, I came here yesterday with my family. I just wanted to see how the organization is. I heard a lot of good things, even from [Oklahoma City Thunder GM] Sam Presti, I talk to him a lot. He said great things about this organization and I can't wait to get further and meet all of those guys."

Schröder, an eight year vet, who can play both guard positions, averaged 15.4 points, 5.8 assists, 3.5 rebounds and 1.1 steals while shooting 43.7% from the field in 61 games during his lone season with the Lakers last year.
Joel Pavón
Follow @Joe1_CSP