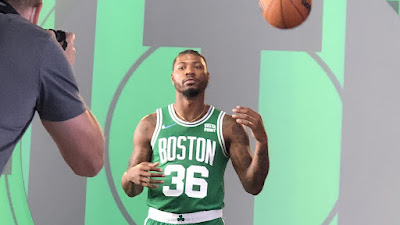 Marcus Smart is a Celtic for what looks like to be the next five years after signing an extension this past offseason.
The four-year, $77.1 million contract will kick in starting the beginning of the 2022-23 season, barring any trades Smart will be 32-years old by the end of the 2025-26 campaign.
Apparently, the longest tenured Celtic was expecting a deal upwards of $90 million before agreeing to Brad Stevens' offer. Speaking 1-on-1 with Jay King of The Athletic, Smart was seeking "at least" $13 million more.

"For me, it was I've gotta get paid," Smart said to King. "I've gotta get mine. Everybody else in my position that I've dominated are getting theirs. And it's like, I know I do way more than these guys. I'm on a better team as well. So it's like, what's going on? I was actually willing to go straight into free agency and go to the market."

Smart ultimately decided to stick with the only team and organization he's ever known, the same one who took a chance on him back in the 2014 Draft with the sixth overall pick.
New Celtics coach Ime Udoka has already put trust in him that he can lead the roster this season, as Smart will more than likely take over starting point guard duties.
On the other hand, Smart, who has never been short of confidence in himself during his seven years with the Celtics, believes this is simply the best investment he could make at this point of his NBA career.

"I wanted to make sure I give myself a shot for another payday eventually by taking care of business on this one," Smart told King. "So it was a business decision for me."