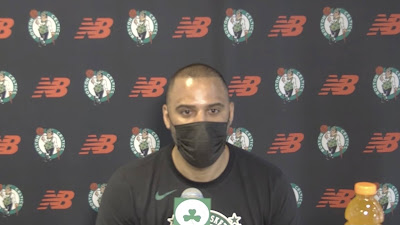 After a brief battle with COVID-19, Ime Udoka rejoined the team in time for the start of training camp at the Red Auerbach Center on Tuesday.
The new Celtics coach tested positive a week and a half prior to Media Day and had to talk to reporters via Zoom Monday, as it was his final day of isolation due to Udoka being asymptomatic.

#Celtics announce new Head Coach Ime Udoka has a breakthrough case of Covid-19. He is in his 10th day of isolation and will not be at media day. Udoka is expected to be at the opening of training camp Tuesday.

Udoka was very pleased with the team on the opening day of training camp, as he officially ran a his practice as the Celtics head coach.

"It was great. It was fun. I enjoy our group," Udoka said during his presser Tuesday. "It's fun to implement your stuff and get the group together for the first time."

He also spoke briefly about Marcus Smart and his role for the upcoming season as the longest tenured Celtic and mostly likely starting point guard.

"He's a natural playmaker," said Udoka of the veteran. "He understands the personnel on this team. It's something he's going to embrace. It's a huge opportunity for him to grow his game."

Following the team's practice on the second day of training camp, Udoka spoke on how the Celtics are moving on from last season by stating "they've come in with the right mindset." It's also clear on one of the main goals this year is to be a much improved ball club when it comes to defense.

"Be disruptive overall," said Udoka Wednesday. "Using our size, being proactive rather than reactive and blowing up certain actions. Last year, we were middle of the pack defensively, there are some things we want to clean up like communication and being aggressive."

On the subject of big man Robert Williams and his health, Udoka touched upon the 23-year old's history of what seems like bad luck at times.

"Huge part is luck, there's some things that happened that you cant control," said Udoka. "He's come back in great shape, taking care of his body and those are things we continue to work on. We're on him about lifting the weights, getting his treatment, taking care of himself."

Overall, the first two days of training camp have gotten off to a great start, according to the Celtics coach and the players that have spoken to the media so far -- the Udoka era is well underway.
Joel Pavón
Follow @Joe1_CSP