Jayson Tatum on COVID-19 vaccine: 'I fully understand the concerns' 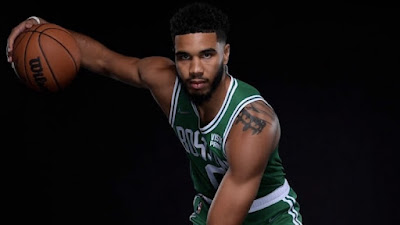 Jayson Tatum was one of the many NBA players who tested positive for COVID-19 last season.
Following his bout with the virus, the Celtics All-Star forward was forced to use an inhaler before games. Tatum, who decided to get vaccinated, says he sees both sides when it comes to the ever growing debate around the NBA if players should be forced to get the vaccine.

"I mean, it's your own decision," Tatum said during Monday's Media Day. "I fully understand the concerns of those who aren't vaccinated that don't want to, and I understand the people like myself that did. It's your own personal health and your reason. Nobody should be judged one way or the other, whatever their decision is."

While Tatum isn't the only one vaccinated on the roster, Marcus Smart made his decision mostly based on not having to deal with the league's limitations when it comes to COVID guidelines.

"It's tough being told what you can and can't do with your own body," Smart said during his Media Day presser. "For me, everybody is entitled to their own opinion. I chose to get vaccinated because, quite frankly, I didn't feel like dealing with the BS. But that was my decision, and I stand with anybody who makes their own decision to deal with what they feel is best for themselves.
"Unfortunately there's certain situations where the league will make it for players who aren't vaccinated, but I chose to get vaccinated because I didn't want to deal with the BS, and I didn't feel like causing my team any disparity when it comes to me not being available. I respect everyone's decision, pro or against."

For others, it was a matter they preferred to keep private like newly acquired guard Josh Richardson, when asked about his own skepticism towards the vaccine, mainly due to a deleted post on the subject earlier this summer.

"That subject is pretty personal," he said to reporters on Monday. "I've kind of talked about what I'm going to do and what I'm not going to do with my family and my circle, so I'm not really sure. But I think it's good that people are still educating themselves on the subject and going forward, I'm not sure."

Jaylen Brown also called the decision to get vaccinated or not a "personal" one.

"I have my own thoughts about it but I respect my teammates' decisions and things like that," Brown said during his Media Day press conference. "I know everybody has their own opinion about it but I think it's a personal choice."

Celtics coach Ime Udoka recently tested positive for COVID-19 and was on his final day of isolation Monday after being asymptomatic, as he hopes players aren't forced to miss any games in New York and San Francisco due to local mandates that bans anyone who is not vaccinated from entering their arenas.

"Guys have been informed and educated pretty rigorously on all of the vaccination benefits and it's a personal choice that guys have to make on their own," Udoka said via Zoom. "We'd love to have close to 100 percent if possible and obviously avoid certain situations. But like I said, guys have to make a choice at the end of the day"

Brad Stevens, the Celtics president of basketball operations said the organization is doing all it can to bring the number of vaccinated players up on the roster.

"Our hope is that we get as close to 100 percent vaccinated as soon as possible," Stevens said Monday. "That's our hope, that's our desire. Obviously, we'll continue to work from our end on what we can do, and work from the educational standpoint within the organization and do what we can, and at the same time everybody has to make that decision for themselves."

While Stevens noted that the bigger picture with being vaccinated shouldn't just revolve around playing games or not but rather focus on lives being lost and hospitals getting overcrowded.

"I think that's the thing that, you talk about being fully vaccinated and you talk about him getting it and breakthrough cases or unvaccinated cases, the scariest thing for me is just the health of everybody," Stevens explained. "People talk about games and talk about all the things that come with that throughout the course of the season, but we have hospitals overflowing, and people are having to make decisions on who gets oxygen.
"It's a sad situation we are in as a world. Like everybody else, I hope that gets improved quickly."